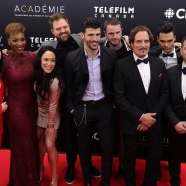 A Colony | Une colonie wins Best Motion Picture
The  2019 Canadian Screen Week concluded its festivities with the biggest night of celebration at the Canadian Screen Awards: Broadcast Gala. The awards show was broadcast live from Toronto’s Sony Centre for the Performing Arts on CBC.

A total of 20 awards were presented to Canada’s best screen talent throughout the evening, with highlights including:

Dominique Provost-Chalkley was named the Cogeco Fund Audience Choice Award winner, presented during the live show by two past winners, CARMILLA stars Elise Bauman and Natasha Negovanlis. 7,752,418 votes were cast to determine the winner of this award.

“It’s been a fantastic week embracing and celebrating homegrown talent, and their ability to engage audiences,” said Beth Janson, CEO, Academy of Canadian Cinema & Television. “As another Canadian Screen Week comes to an end, we are proud of the unique opportunity we have to introduce incredible Canadian film and television to a broader audience. The Canadian Screen Awards puts a spotlight on the talented content creators and storytellers in our own backyard and on the world stage.”

Academy Icon Award
The Kids in the Hall

Visit www.academy.ca to view the full list of winners from the Gala event.

ABOUT THE ACADEMY OF CANADIAN CINEMA & TELEVISION

The Academy of Canadian Cinema & Television is the largest non-profit professional arts organization in Canada. We are dedicated to recognizing, advocating for, and celebrating Canadian talent in the film, television, and digital media sectors.

We would like to thank Melissa Prince & Sandy Caetano of National PR for the invitation to this event.

← The 6th Annual Angels Catwalk In support of the SickKids Transplant Centre@Steam Whistle Brewing-Thurs.,April 4th,2019 MADE WITH LOVE@FERMENTING CELLAR-Mon.,April 8th,2019 →