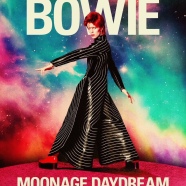 A film of the extreme beauty, treachery and greed of the Wild West showcasing Nicholas Cage as Miller, a greedy veteran buffalo hunter with a wealthy but naive Harvard drop-out protégé, Will Andrews (Fred Hechinger), leading to extreme effects on nature, humans and humanity.

In this wondrous adaptation of John Williams’ western, the Wild West and Colorado Rockies can be seen in their glory before the plundering of paradise lost.

The juxtaposition of Will’s search of  “a stronger purpose and more meaning in my life,” versus the great greed of Miller translate into a compelling film of how the Wild West was lost.

Director Brett Morgen’s Moonage Daydream is his new film tribute to David Bowie. The filmmaker was granted unprecedented access to Bowie’s personal archives, combing through roughly millions of video footage, photography, and visual art that Bowie created over the years—and piecing them into a fragmented narrative. It took years to film this unconventional documentary.

The film jumps back and forth to Bowie’s different eras: Tonight 1984, Ziggy Stardust, the Berlin trilogy, Let’s Dance and his final album, Blackstar.

Moonage Daydream is the first film to be officially sanctioned by Bowie’s estate. His first wife, Angela Bowie, is never mentioned within the narrative, while his marriage to Iman is given its own chapter. Also, Tin Machine a band Bowie fronted was barely mentioned.

There were candid vintage news clips, including a particularly famous interview with Dick Cavett, amplifying the mystery. “Rumors and questions have arisen about David such as who is he, what is he, where did he come from, is he a creature of a foreign power, is he a creep, is he dangerous?” Cavett asked, rhetorically, in 1974. “Is he smart, dumb, nice to his parents, real, a put-on, crazy, sane, man, woman, robot, what is this?”

There was great footage of him recording, smearing charcoal across a massive canvas, and wandering through rural corners of Asia, accented with reflections on his life. He stated he wasn’t a fan of the L.A. lifestyle, so Asia, Berlin New York and Switzerland were his places of choice.

Bowie’s Let’s Dance era, a spotlight on his 1983 commercial success, as Bowie discusses his newfound desire to “work in a more obvious and positive manner,” showcasing ’80s stadium tour footage, crazed fans running into the stadium and clips from Bowie’s Pepsi Commercial with Tina Turner, which turned “Modern Love” into a jingle for the soft drink. The director is formally commenting on the gross commercial excess of the era, if not foreshadowing. Bowie mentioned “l don’t begrudge anyone who wants an audience.”The final chapter of Bowie was the Blackstar era, The effects of the background of the moon and space was mesmerizing. Bowie said   “All people, no matter who they are, wish they’d appreciated life more,” Bowie’s voice  broadcasting from the cosmos.

Overall, a fan favourite for the Bowie aficionados and rare footages of the “Thin White Duke. “ It ‘s a great recommendation for the sheer history of Bowie.
After the Moonage And Daydream documentary, we were at the TIFF Lightbox for a red carpet reception for ZWIGATO with director and actress Nandita Das and comedian Kapil Sharma.

It’s The TIFF Festival Area where fans and pedestrian immerse themselves with the vibe of TIFF. It was no different for us, as we first stopped by The House Of Peroni.

We had a chance to relax for a little bit at the Nespresso lounge on King St. for a coffee in their rooftop before we attended our next screener. It was a great view to observe the crowds and people watching during TIFF time.

Strolling along King St., we discovered that the Prisoners Daughter’s red carpet was happening at Roy Thompson Hall. We captured some of the festivities by luck before we departed for our next screener.
Next was our last film for day#7

Zac Efron portrays a naive young merchant mariner who goes on a goodwill tour to deliver beer to his soldier friends to discover the horrors and truths of the Vietnam War.

After the success of Green Book , Oscar best film winner, director Peter Farrelly returns with this heartwarming entertaining  true story of male camaraderie,starring Zac Efron and Russell Crowe, with Bill Murray in a cameo role, The Greatest Beer Run Ever leads to the maturing and political awakening of the likeable main character, John Chickie Donahue.

After The Greatest Beer Run, our evening was finished for day#7.