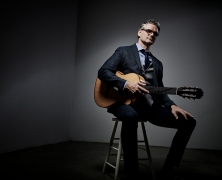 Jesse Cook’s Going to Get Your Attention with “HEY!”

Track Lands Ahead of Cook’s The Tempest 25 Tour this March, Marking 25th Anniversary Since ‘95 Debut, Tempest Award-winning and Internationally acclaimed guitarist, composer and producer Jesse Cook has swirled together Spanish guitar and Algerian violin and gumbri into an infectious musical mashup with multi-instrumentalist Fethi Nadjem for “HEY!” — a special single release, available […]

You may have seen Toronto-based Eric Schenkman on stages before thousands of fans worldwide with the Spin Doctors. He is one of the band’s not-so-secret weapons — a vital songwriter and a virtuoso guitarist who crafted the ‘90s band and co-wrote all five of their Top 100 hits. He also worked with Chico Hamilton, Carly […]