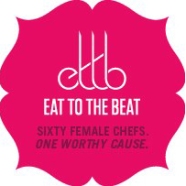 Toronto, Ontario – October 10, 2017 – A mecca for urban foodies who come to experience the best Ontario’s culinary scene has to offer, Eat to the Beat presented by KitchenAid is a signature event of the Canadian Cancer Society (CCS) and is celebrating its 22nd year on Tuesday, October 17 from 7pm – 10pm at Roy Thomson Hall (60 Simcoe Street). It is the only event in Canada that exclusively features the talent of 60 female chefs – women supporting women through the challenges that come with a breast cancer diagnosis. General Admission Tickets are $189 and include all food and beverages (a tax receipt will be issued for the maximum allowable amount). For tickets or to see the line-up of chefs and beverage participants, please visit http://www.eattothebeat.ca.

“Eat to the Beat has become Toronto’s must-attend culinary event and fundraiser over the years thanks to our participating chefs, sponsors and supporters,” says Cathy Park, co-chair, Eat to the Beat.

Guests can enjoy specially prepared savoury and sweet dishes at 60 stations, along with wine, beer and a selection of non-alcoholic libations from 20 of the finest beverage purveyors set up around Roy Thomson Hall’s outer lobby.

“KitchenAid is thrilled to be the presenting sponsor of Eat to the Beat again this year,” states Janice Ryder Sr. Marketing Manager, KitchenAid and Jennair. “It’s such a fun evening out with the opportunity to sample some amazing food and drink from some of Toronto’s top female chefs.”

In addition to food and drink, colourful and whimsical one-of-a-kind corsets, inspired by food and created and modelled by breast cancer survivors, women whose family and friends have had breast cancer and volunteers have become an integral part of Eat to the Beat.

“A fun, colourful and cheeky tradition at Eat to the Beat, breast cancer survivors and their supporters add class with a bit of sass by modeling original food-inspired corsets that they have created,” adds Joanne Brophy, co-chair, Eat to the Beat.

Started 21 years ago by sisters Lisa and Abby Slater, Eat to the Beat has raised more than $3.9 million since its inception. Funds raised at Eat to the Beat will be directed towards supporting the full spectrum of breast cancer programs and services of the Canadian Cancer Society – from important research where the latest innovations are developed to direct patient support – and will benefit not only the estimated 25,000 Canadian women who are diagnosed every year with this disease, but also the families and friends who love and support them.

We would like to thank Peter Ashworth | Ashworth Associates Inc. Public Relations & Communications for the invitation to this event.
416-6003-6005 | peter@ashworthassociates.com

← CAROL WELSMAN IS BACK WITH SOMETHING JUST ‘FOR YOU’ HER FIRST CROWD-SOURCED RELEASE Home Aid Los Angeles Hosts Second Annual Fundraiser In Beverly Hills Thurs.,October 12, 2017 →