By Sorin Simniceanu
Porsche Oakville hosted the season ending Cars n’ Coffee this year with lots of …you guessed it cars and coffee! The event was could not have been made possible if it were not for the generosity of the dealership, offering what seemed to be a never ending supply of coffee and croissants , pastries, coffee and other beverages. 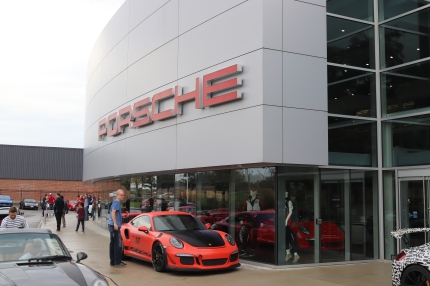 It also would not have been possible without the numerous private enthusiasts which showed up with a plethora of Porsches from every era, complemented with a few Lamborghinis, Ferraris, a Corvette and even a Toyota GT86. While perusing the outdoor privately owned vehicles was a treat, walking into the storage garage was the real attraction as it stored multiple models from Porsche’s renowned GT series.

Walking through the multiple GT3 and GT3RS models I found myself thinking that this line-up could only lead to something very special, as if these cars were not already special enough. Boy was I right! At the very back of this amazing storage garage was a very rare and practically unattainable Porsche 911R! This is the car that was sold out before the first models were ever shipped out to their very lucky owners. The reason behind its exclusivity is the limited production number of only 991 (see what Porsche did there) a high-performance naturally aspirated flat-six and the much desired manual transmission. 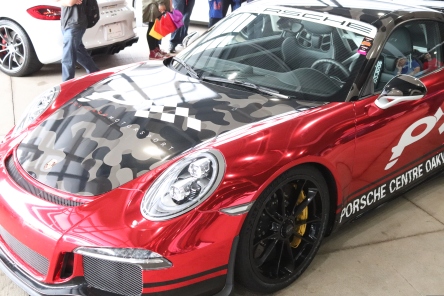 That’s right; the 911R is the only modern 911 in the lineup to have a manual transmission making it a very sough-after machine. After, snapping a few shots, I made my way inside where a few prospective buyers were speccing out their future Porsches. As my friend AJ and I made our way outside the final portion of any traditional Cars and Coffee was just about to begin…the drive-off. This is the part where people drive their cars off, but not before doing a burnout or a rapid acceleration to show the crowd just what it is that makes their car so special. And boy were we in for a treat. This is something I tried replicating in my 4 door family sedan without getting so much as a head nod. I guess I will keep saving for that 911R if one lucky bugger ever decides to let one go.