Posted by BK on February 8, 2018 in Music Reviews, Reviews | Leave a comment

Thursday night’s kick-off concert by Imagine Dragons at the Armory in the NFL-affiliated Nomadic Live series had two contrasting story lines: You had an old building being tested in new ways, and a still relatively new band that wasn’t tested all that much. 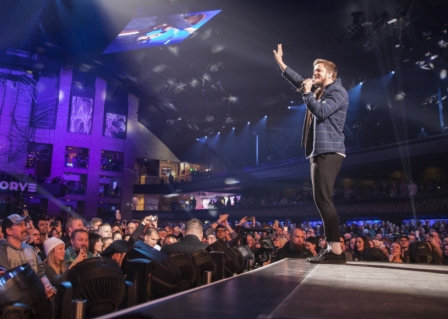 Imagine Dragons played nearly an identical set to the one offered at Xcel Energy Center last October and all other stops on their latest tour. It’s a well-imagined show that the anthemic Las Vegas rockers have turned into a well-oiled celebration chorus machine. They brought the same hi-fi video and lighting production, too, and frontman Dan Reynolds even made a lot of the same inspirational speeches about “bridging the divide in this country” and removing the stigma of mental illness.

The bigger unknown was the Armory, which had been downgraded into a crumbling parking garage but underwent an ambitious renovation over the past year and a half to become a full-time music and events venue.