Out of 100 artists to make the initial cut, Jordana and her quirky, harmony-propelled a cappella hit “Run” has landed in the Top 10, and is one of just five homegrown talents to be hand-picked by CBC’s judges and the only jazz entry remaining.

A dazzling fixture in the local and surrounding Jazz community, Jordana has also recently been heard across Mystic Sons, Spotify’s Pop Rock playlist, and more for her heavy-hearted love-gone-wrong ballad, “Bitter Sweet Heart” — watch it on YouTube here!

Now’s a great time to visit or revisit her full-length release Neither of Either on Spotify or Soundcloud, including her witty and wry rendition of Alanis Morissette’s “You Oughta Know.”

Former Lawyer Turned Singer/Songwriter Makes Competition Debut
on the Heels of Latest Release, Neither of Either 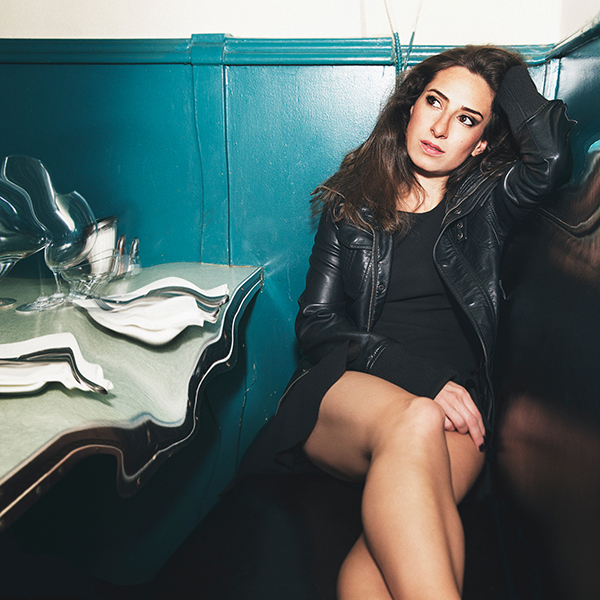 Jazz/pop singer/songwriter Jordana Talsky has made the next cut in CBCMusic’s 2018 SEARCHLIGHT competition, landing in the Top 10, and one of five artists selected by the in-house judges.

As the only jazz entry remaining, the spotlight is shining extra bright on this talented singer/songwriter, whose 2017 release Neither of Either garnered critical praise.

Featured in SEARCHLIGHT for “Run” — Jordana’s bouncy search for clarity over constraint — her lyrics continue to resonate alongside her harmonies and lush a cappella.

“Run’ is about the struggle to escape the constraints and distractions of daily life and of our own minds, into a more grounded stat of serenity and reflection,” Jordana Talsky tells CBC. “When I sing, “I would like to run away,” I’m talking about running towards that part of yourself that experiences clarity and spiritual fulfillment, be it from the beauty of nature, connection to other people, music, or anything that’s ‘infinitely happier.’”

Artists across the country flocked to submit their original material in the annual contest earlier this year, with only 100 making the first round. The Top 10 were chosen Wednesday, March 14th, including five by CBCMusic judges.

The Grand Prize Winner will be announced Monday, March 19.

Of all the extraordinary things setting Jordana Talsky apart — the stylistic breadth of her music, her dexterity with originals and covers, the zigzagging career path that brought her to a musician’s life — it’s her voice that dazzles most. Exquisite, elastic, expressive beyond words but buoyed by them, Talsky’s singing is that rarest of things: utterly unique yet instantly accessible.

And it’s why Neither of Either, Talsky’s brilliant second album and most assured artistic statement to date, can easily be slotted into pop, jazz, adult contemporary, alternative or some electrifying amalgamation of all four.

Whether she’s fearlessly chronicling a tattered relationship, as she does in the candlelit, lump-in-throat ballad “Bitter Sweet Heart,” clenching her proverbial fist in the fierce and staccato “Sick” or conjuring a supper-club vibe in the slinky, harmony-propelled a cappella “Run,” Talsky brings the heat… and the heart. That the Toronto-based singer/songwriter characterizes music as her form of journaling makes her vivid lyrics even more resonant.

It also explains why the highly in-demand Justin Abedin, who netted multiple Juno Awards with ace former band jackSOUL, stepped up to produce Neither of Either, adding guitar and drum programming. Abedin knew instinctively what the world will soon discover: Jordana Talsky is a towering talent, one far too versatile to fit neatly into a single categorical box.

“There’s so many different styles on the album, and there were many discussions about whether these songs could live together,” Talsky says, namechecking her esteemed co-writing partners, Canuck-born, L.A.-based wunderkinds Justin Gray and Don Breithaupt (see Mariah Carey, John Legend, Joss Stone, Patricia O’Callaghan) who worked on one track each.

Talsky continues: “‘Bitter Sweet Heart’ has a pop/electronic leaning. ‘Don’t Know’ has a triphop feel courtesy Davide Direnzo’s drumming. I have personally walked different roads and my personality has very disparate parts, so the diversity of the record makes sense. Plus, in a performance setting, these songs can go in all sorts of directions depending on the configuration I’m playing in.”

Long before Neither of Either’s release, there were clear markers of the accomplishments to come. In 2015, Talsky was nominated as best vocal jazz artist by the Toronto Independent Music Awards. In 2014, she placed as a finalist in the John Lennon Songwriting Contest and as a semi-finalist in the Sarah Vaughan International Vocal Jazz Competition.

Talsky has commanded marquee stages across North America, among them the Iris Jazz Stage series (Amherst, NY), TD Toronto Jazz Festival, TD Newmarket Jazz Festival, and at Spaghettini Lounge (Seal Beach, CA). She has also enjoyed widespread airplay both for Neither of Either and for Standard Deviation, her 2013 debut, a smooth-jazz collection of originals and eclectic covers (Alannah Myles’ “Black Velvet,” The Police’s “Murder by Numbers”).

There’s a killer cover on the new album, too: a chilly, a cappella reading of Alanis Morissette’s “You Oughta Know” (“She is an influence and I was feeling angst-y one day and I just started messing around with it,” Talsky howls). More than anything though, Standard Deviation serves as a yardstick for measuring Talsky’s monumental — and genre-busting — songwriting growth in the interim.

Interestingly, Talsky’s own voice, and not guitar or piano, serves as her primary compositional instrument.

“I’ve mostly been using a Loop Station to compose,” she says. “The textural qualities of a song like ‘Run’ (currently in the Top 100 of CBC’s 2018 Searchlight Contest) are the result of the way it was written using my voice. But in general, my songwriting is haphazard. There’s a lot of revisiting, changing around and sometimes mixing and matching bits of different songs. And I have a bunch of notebooks with random stream of consciousness lyrical ideas as well as lots of smartphone Voice Memos.”

Talsky also grouped Neither of Either’s 10 songs with old-school sequencing in mind. “The ‘Side A’ songs are more indie, alt, and quirky and even a little bit electronic. ‘Side B’ still has a leg in the pop-jazz world, giving a nod to what had come before when I was known primarily as a jazz singer.”

Jazz singer, pop singer, opera singer… voice has always, always been Talsky’s calling card. “I was in the Canadian Children’s Opera Company, and I went to Claude Watson School for the Arts which was also classical-based, so I trained in opera and did some light lyric opera when I was studying at McGill University. But I was always listening to different kinds of music. I ended up singing background in a funk group and doing a cappella. Years later I started playing jazz clubs.”

It was while playing those clubs that Talsky ultimately located her musical confidence, boldly eschewing an ostensibly safe career for the potentially topsy-turvy — but far more soul-satisfying — life as a working musician. “I was a lawyer and I practiced full-time for years,” Talsky reveals with characteristic frankness. “But just before the release of Neither of Either, I transitioned out of it to pursue music full-time.

“There was always this niggling thing of ‘When’s it going to be time to follow music?’ After some turmoil in my life, I finally said, ‘I am doing this.’ But in a good way,” she laughs. “And I think my story helps people connect emotionally with the music.

“I am actually aware of one other person who was a lawyer and who heard my story and was inspired to quit law to pursue his passion. The key thing is, he heard about my story through hearing one of my songs. So, all this seemingly disparate stuff is connected, just like the music on the album. I am all these different things. And now, with this album, it’s all bound together.”