PHOTOS BY DINESH SHETTIGAR
PANDIT BIRJU MAHARAJ MESMERIZES DANCE ENTHUSIASTS WITH HIS PERFORMANCE AND ABHINAYA
Sanskriti Arts presented Dance Diaries 2018, a magical dance show with the legendary Pandit Birju Maharaj this week in Mississauga. The Kathak icon, along with his foremost disciple Saswati Sen, presented a series of storytelling and expressions through the classical form of the centuries old dance mastered by the legend. The mesmerizing show had audiences spellbound as they watched the
sprightly 80-year old maestro on stage presenting his unique and legendary dance techniques that included an entire section on Abhinaya, meaning conveying stories through expression.

“We are blessed to have Pandit Birju Maharajji here in Toronto,” said Puja Amin on July 8, founder of Sanskriti Arts who has brought forth Dance Diaries for dance fans to learn the art of popular dance under the tutelage of India’s best choreographers’. “He is now 80 years old and this is his last tour to North America. And this is a once in a lifetime opportunity to perform with the legend himself on stage during the final showcase.”

The story of Ahilya and how she was turned into a rock and turned back into human form by Lord Rama was told through the dance and Natya Shastra of Sen. The Show also included performances from Sanskriti Arts students, solo performance by Puja Amin and dances by Pandit Birju Maharaj and his foremost disciple Saswati Sen. The performances ended with a finale of jugalbandi between Pandit Birju Maharaj, internationally recognized as the greatest living exponent of North Indian classical dance ‘Kathak’, Sen and his accompanying artists on vocal, table and harmonium holding the audience spellbound.
Presented by Sanskriti Arts and HSBC Bank, the Grand performance took place at the Maja Prentice Theatre in Mississauga and presented dance enthusiasts with the one and only award winning icon of Kathak representative from India. This will be followed by workshops with Pandit Birju Maharaj this week for beginners and advance students as well as a class of Abhinaya 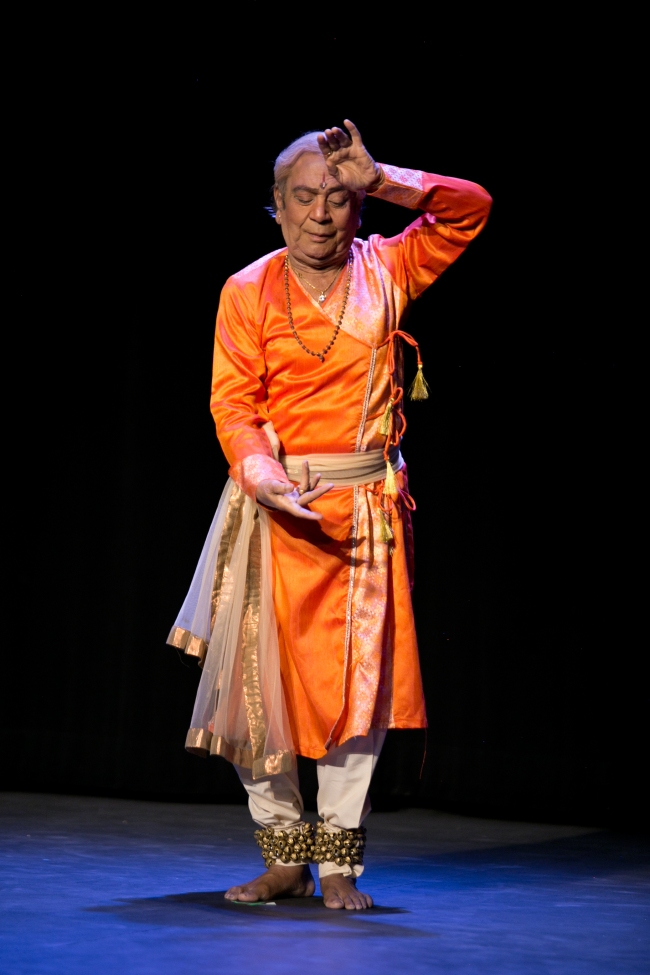 “When you go to do darshan, it’s like they say bhagwan (God) chooses us. Birju Maharaj ji is just like that,” said Amin. “They chose us, we didn’t choose them. The moment the opportunity came up, we said we cannot let this go. We are honoured and blessed to host Maharajji on his last tour and have a Toronto show and workshop series as well as a Masterclass and an Abhinaya class which is his forte.”
When asked the secret to his health and success, the kathak legend said “From all the big artists, I got from them aashirwad (blessings), be it Bismillah Sahib (Khan), Amir Khan Sahib, Vilayat Sahib or Ravi Shankar. More than money, I want aashirwad.”
This is the third year of Dance Diaries organized by Sanskriti Arts that began with Bollywood choreographer Saroj Khan who conducted workshops and a finale for students in the GTA in 2016. The journey was taken forward in 2017 with Shampa Gopikrishna, the daughter of Pandit Gopikrishna and a popular established dancer and choreographer in her own right.
“Our future plans include taking our students for a two week journey to India by the end of this year to be tutored with the country’s best choreographers’ and get a once in a lifetime opportunity to learn from the legends themselves,” said Amin.

About Sanskriti Arts
Established in 2003, Sanskriti Arts is the brainchild of Puja Amin who has brought together performers with a passion for dance and extreme drive to explore their potential. Under her tutelage, the company takes pride in raising awareness of the various forms of South Asian dance, spread Indian culture and ethnicity through traditional and contemporary dance and music performances. They have been a pioneer in authentic South Asian Entertainment including classical, folk and Bollywood repertoire. The Sanskriti Arts Ensemble has performed in concerts and music videos for Falguni Pathak, Boman Irani, Lisa Ray, Jonita Gandhi, Sukhwinder Singh, Lata Mangeshkar, Priyanka Chopra and Shahid Kapoor amongst others.
About Pandit Birju Maharaj
The most extraordinary artist in the history of Kathak dance, Pandit Birju Maharaj, the artistic director of his company, is internationally recognized as the greatest living exponent of North Indian classical dance ‘Kathak’.
Beate Gordon, Director of performing Arts Department of the Asia Society, New York wrote: “Birju Maharaj is in
the class of the great western performers such as Baryshnikov, Margot Fonteyn, Martha Graham and Merce Cunningham. He is a phenomenon”.

Birju Maharaj was born in 1937 into a family of Kathak dancers. His father first taught him the form and then, after his father’s death, by his uncles. He is now recognized as the foremost master of Kathak dance, having long ago earned the distinguished social title of “Pandit”, reserved for those who are supreme masters of their art form. He has helped to re-popularize Kathak, marrying elements of both the ancient, holy style and the secular, dramatic style of later years, and pioneering the use of multiple dancers in his choreographies. Filled with technical virtuosity and flamboyance, Kathak is characterized by elaborate rhythmic footwork (tatkar), graceful spins (chakar), hand gestures (mudras) and subtle expression of moods and emotions (bhava-abhinaya). An extraordinary artist, Birju Maharaj integrates pure classical movements and style with a distinctly contemporary use of space in his choreographies.
Among many awards, Pandit Birju Maharaj has received the Sangeet Natak Academy Award (the highest civilian arts award) and the Padma Vibhushan (the highest presidential award for achievement) from the government of India. He was the invited choreographer at the American Dance Festival in Durham, North Carolina in 1991, and was honored with a special award at the prestigious Avignon Festival in Paris, France in 1995. He was the chief guest and performed at the international Kathak festivals at Chicago and at San Francisco. 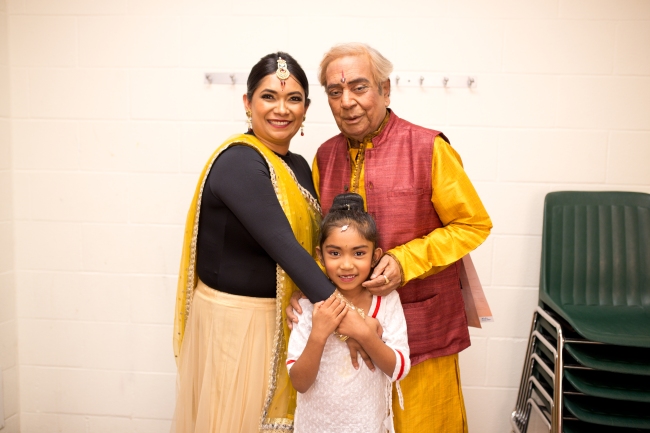 The vocalist, percussionist, composer, poet, choreographer and dancer is a versatile artist. Not only on India, he is familiarly known abroad, nearly all over the world. Choreographic compositions of Pandit Birju Maharaj have been presented in most of the prestigious dance festivals in India, USA, Canada, United Kingdom, France, Germany, Italy, Austria, Czechoslovakia, USSR, China, Japan, Burma, Ceylon, Malaysia, Australia and Indonesia.
Other Artists in the Company.

About Saswati Sen, Foremost Disciple and Dancer
Internationally reputed touring artist from India, Saswati Sen is one of the foremost disciples of the legendary
Kathak maestro Pandit Birju Maharaj of India. She has given numerous solo performances in all the major dance venues in India. She has performed in the Festival of India concerts in Great Britain, USSR, Japan, and France and also at many international festivals. She performed as a troupe member of Pandit Birju Maharaj at the world famous Carnegie Hall, New York for ‘Music Festival of India’ performance in celebration of Golden Anniversary of India’s independence. A recipient of the Sanskriti Award, the Shringar Mani Award and the Critics Recommendation Award, today Saswati is regarded as an artist with immense versatility and talent both as a performer as well as a teacher and is one of the best exponents of the famous Lucknow style of Kathak dance of India.

Utpal Ghosal, Tabla artist
Utpal Ghosal is a renowned Tabla artist and has been working with Pandit Birju Maharaj in his productions for more than eleven years. It is fascinating to see the grasp of rhythm he has and how the maestro challenges him. He had his tabla tutelage under the guidance of Sri Gour talukdar and Sri Pankaj Chatterjee for more than 10 years. Later he had advanced training of tabla from Ustad Sabir Khan, son of Late Ustad Keramatullah Khan and presently a disciple of Pandit Subhankar Banerjee in tabla. He had learnt the intricacies of accompanying Kathak dance on tabla from Pandit Vijay Shankar and Padmavibhushan Pandit Birju Maharaj.
Chandrachur Bhattacharjee, Sitar artist
Chandrachur Bhattacharjee had his public debut at the age of 14 in Calcutta, India. Since then he had played in almost every major cities in India and many other places abroad, which includes Japan, Italy, France, Norway, Finland, United Kingdom and USA. Besides Indian classical music he has also learnt the theory of Western Classical music.

Anirban Bhattacharyya, Vocalist
Anirban Bhatacharyya is a Hindustani classical vocalist of the Patiyala tradition and a social anthropologist from Kolkata. A senior disciple of Padmashree Ajoy Chakraborty, Anirban aims to break the boundaries between different performance traditions and create a unique space for him. A President of India Gold and Silver Medalist from All India Radio in Khyal and Thumri, and Champion in Thumri from State Music Academy in 2010, Anirban is also a National Scholar in Rabindra Sangeet and had the opportunity of learning from and performing with the legendary Kathak maestro Padma Vibhushan Birju Maharaj all over India and abroad.
About the art form: Kathak
Kathak dance originated in northern India, and by the 13th century was a religious story-telling form mainly performed in temples. By the 15th century, however, it became a more social practice, performed for royalty at palaces as entertainment. The form became more theatrical and flamboyant, with dancers wearing numerous ankle bells to accentuate their rapid spins and complex footwork. This created an essence of rhythm and footwork that is now an integral part of the dance. The stories told by the dancers became less religious and more dramatic, focusing on tragedy and romance. Today, Kathak is often performed as a combination of both its ancient and more modern permutations, showcasing the arc and social relevance of the form. Kathak expresses abandon and yet it has a reticence that offsets this flamboyance and lends it a charm that is irresistible.

We would like to thank Renu Mehta
Imagebuilderz – Your Communications and Image Enhancement Partner for the invitation to this event.