Lightning Echoes Will Spin You “In Circles” With Debut Release

“Talented artist! We like the singing voices so much” — xKira Music
“This is very cool!” — Santa Rosa Records
“The voices in this record are impressive!” — Keep Walking Music
“I really like the interplay between the two vocalists!” — Pop Occulture
“Interesting arrangement!” — EARMILK 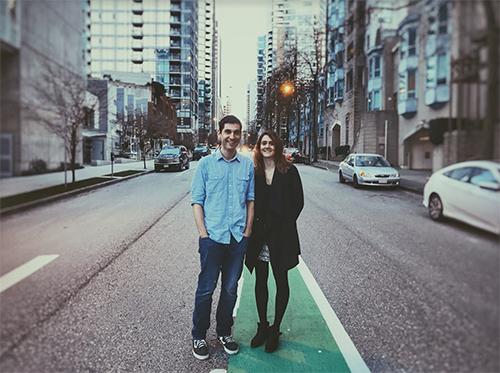 Alternative pop duo Lightning Echoes is taking listeners on a spherical journey of sound with their newest release, “In Circles” — available now!

The Vancouver-based pairing is equal parts singer/songwriter Kaitlin Deavy and producer Alejandro Zarazúa. Having teamed up in February 2018 amidst their respective studies on music and production, the multi-instrumentalists were driven by their shared vision of music and human connection.

On “In Circles” you’ll hear seemingly simple melodies swirling among complex layers of indie, folk, and what the two call “smart pop” elements.

“We wrote “In Circles” before officially becoming Lightning Echoes,” explains Zarazúa. He and Deavy studied Music Technology together and, after being assigned to work together, started opting to consistently until it blossomed into a long-term partnership we see — and hear — today. “It was actually part of our final portfolio project for the music program we studied together. We wanted some live material for the portfolio, so we invited some friends to the studio and recorded four songs that day.”

This meant it became about more than just the music. Zarazúa and Deavy quickly became in charge of the entire production process, including setup, live audio engineering, cameras & lighting, live mix, audio/video editing, mix and mastering. The result is a fun, interesting and accessible experience for the everyday listener with “special treats” for the more experienced ear.

“We like pop music, in the sense that we usually enjoy common time signatures and rhythms, basic chord patterns, et cetera,” Zarazúa explains.  “We call it ‘smart pop’ when all these ‘simple’ elements are used to craft a beautiful piece of music, and not just as a formula to produce factory-like radio hits, which seems to be the mainstream meaning of ‘pop music’ nowadays.

“We also really enjoy it when an artist or band writes something that is complex in essence, but results in a song that you can follow, sing along, or dance to, etc. This is our definition of good music… Songs that are well-crafted and involve a lot of thought and honesty, but you can also enjoy without much context or without having to pay too much attention.”

So how did they get there to craft their brand of ‘smart pop’?

“We talked about it a few times, and our best conclusion so far is that it’s kind of like language… When we write songs, we usually start with a few simple chords or melody, or even just a scale or some melodic idea, and then we play around without thinking too much for a while,” Zarazúa continues. “Since we are also producers, we get to play with the sounds during and after the recording process, so we also have the freedom to think about the soundscape we want to create, and add some smaller details here and there that may be barely noticeable (if at all), but hopefully just add up to make the listener smile, whether they are thinking about the theory/technical side, or just enjoying the tune.”

Creating under a mutual musical language of sorts can often be deeply rooted in a shared value or appreciation of something outside the craft. For Zarazúa and Deavy, that connection is one of humans.

“One of the main things that brought us together in the first place is our approach,” shares Zarazúa. “We both appreciate deeper connections with other humans… Being honest and sharing who we are… Caring for other people and trying to do good in the world… We want to use music as a way to find other people who feel the same way and bring us closer together.

“In the end, for us it’s all about pursuing happiness and trying to do something good in the process.”

“In Circles” is available now.

We like to thank Eric Alper for the artist profile and press release !