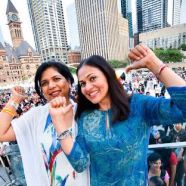 The colours and festivities of India shaded City Hall on Sunday when more than 75,000 people participated in the Indian Day festival and Grand Parade to mark India’s 71st Independence Day. Organized by Panorama India with the support of the Consulate General of India in Toronto, the all-day event celebrated India’s culture and heritage and presented 400 local artists, music and dance performances, a kid’s zone and an international bazaar with kiosks exhibiting fashion, jewellery, handicrafts and an array of food. The King of Bhangra Malkit Singh, Indo-Canadian singer Parichay and Indian Actor Pukhraj Bhalla also entertained the massive audience. 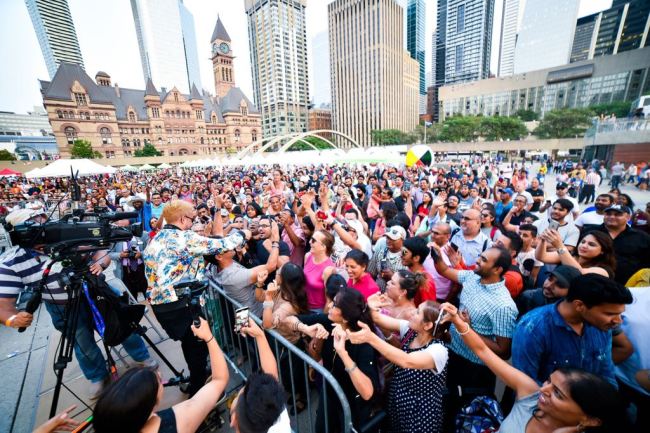 The event kicked off with the National Anthems of Canada and India followed by the Grand Parade, marshalled by Bollywood actor Jimmy Sheirgill. The parade consisted of 17 floats put together by 23 organizations, each one created by local social and cultural Indo-Canadian groups from the Greater Toronto Area (GTA) under the umbrella organization of Panorama India. The floats represented the various States (provinces) of India and included Punjab, Gujarat, Kerala, Rajasthan, Jammu, Kashmir & Laddakh.

Dignitaries emphasised the long-standing relationship between Canada and India built on shared traditions of democracy, pluralism and strong ties of friendship and praised the cultural diversity and democratic values of India as well as Indian Diaspora’s contribution in every aspect of Canada.

Consul General of India Dinesh Bhatia addressed the gathering on a sombre note observing a moment of silence on the demise of the former Prime Minister of India Atal Bihari Vajpayee.

He explained the relevance and purpose of organizing India Day Parade while stressing on the importance of strong India Canada bilateral ties.

During the day, there were 33 performances consisting of various cultural folklore dances, a fashion show and concert performances. Punjabi singer Geeta Zaildar opened the stage with his high energy performance while Bollywood actor Pukhraj Bhalla interacted with the crowds.
Singer, song writer and producer Parichay warmed up the audience with renditions of popular Hindi and Punjabi songs.

Headliner and King of Bhangra Malkit Singh put on a memorable performance, energizing crowds with a one-hour performance of his most popular songs. The finale act was by the
Shiamak Davar Dance Troupe with over 50 performers on stage.

ABOUT PANORAMA INDIA:
Panorama India is a not-for-profit umbrella organization to help unite various Indian cultural associations and groups, project a common identity based on their Indian heritage, and celebrate Unity in Diversity. Established in 1999 with the support from Consulate General of India, Toronto, the organization has a mandate around three pillars – Celebrate, Collaborate and Educate.

Panorama India provides a platform for all Indian cultural associations, groups, and individuals to exhibit and showcase arts and culture. The organization also fosters a better understanding between India and Canada and is proud to build bi-lateral relations with India and Canada through culture. For more information, visit http://www.panoramaindia.org; Follow us on Facebook at PanoramaIndia.org; Twitter at: @PanoramaIndia.org and Instagram at: Panoramaindiatoronto.

We would like to thank Renu Mehta for the invite and press release to this event.

← The Kings Vlog Nashville & Reveal News on Upcoming Single — ”Circle of Friends / Man That I Am” — Coming This Fall! Halifax-based Christina Martin is a multi-award winning singer-songwriter ! Her New Album-“Impossible To Hold”,Out today-Friday, August 24th,2018!,and a number of East-Coast dates for now ! →