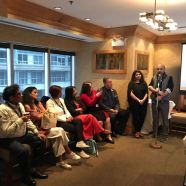 A film about bonded child labour will soon be making waves when it is released early next year. The first look launch of Jhalki, a moving tale about lost Childhood, was held in downtown Toronto in the midst of the Toronto International Film Festival (TIFF), by its producers along with a flurry of film professionals, media and community members.

The film is a lyrical story of the search of a 9 year-old girl for her 7 year-old brother against the backdrop of bonded child labor in the carpet weaving factories of India. The compelling film promises to take audiences through a bedtime folk story expected to be part of a huge revolution that can impact 200 million children worldwide.

“Today, one in seven children is a laborer. Over 200 million children between ages 5 and 14 work worldwide as some kind of laborer or the other,” said Brahmanand S. Siingh, director of the film on September 9 at Aanch restaurant in downtown Toronto. 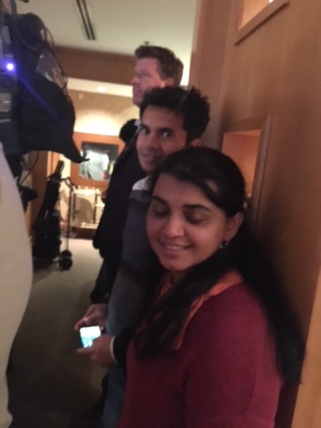 In the film, when her 7 year old beloved brother is traded-off into an inhuman world of child labor with no respite from a terminally gloomy, dark and depressing workplace, his 9 year old sister Jhalki decides to follow her instincts and not take the trade-off lying down. In the process, she ends up running into obstacles of the system that only aids child labor — bureaucracy, corruption and exploitation and so on.

Armed with a folk story of a tireless sparrow that gets her lost grain of food back for her children, a never-say-die attitude and an uncanny presence of mind, Jhalki eventually becomes instrumental for a snowballing movement that frees Babu, her brother, along with thousands of other children caught in the vicious trap.

The story has been inspired a lot by the exemplary work that Nobel Laureate Kailash Satyarthi has been doing as a Child Rights Activist.

“Jhalki is a mirror to our society … and draws our attention to a social malaise that many aren’t even aware of … Children are trafficked, put into forced labor … when what they long for 24×7 is to return to their family,” says Satyarthi in the press notes.“Jhalki’s journey is a journey of hope, of confidence, and of self-belief … Jhalki’s struggle is a relentless process of overcoming the odds and of looking for solutions … in a way that even the most ordinary citizen may feel inspired to fight (against these prevalent practices) and emerge triumphant!”

Actor Boman Irani who plays the character of Kailash Satyarthi in the film says he was honoured to play the role. “The film is entertaining and has a great message for the entire world. It will be a big victory even if just one percent of the population gets it. And, that there’s a cause like this, which we seem to be oblivious about”, he says.

“At the outset, I must emphatically clarify that it is not a biopic on Nobel Peace laureate Kailash Satyarthi. Jhalki is a powerful story of love, courage and hope and we have tried to make it with that purity, which can be seen in Jhalki’s emotions and determination to win. So while the story is the heart and soul, we also ensured we had the wonderful actors and technicians to make this a powerful film.”

“Different people have to do different things, in their own way. My part of the equation, I felt was to create an awareness by making a film that stirs you up and makes you take a stand in no uncertain way. Which is why this film, Jhalki… a moving tale of lost childhood, with an impactful child labour and human trafficking backdrop,” says Siingh.