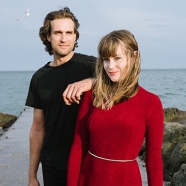 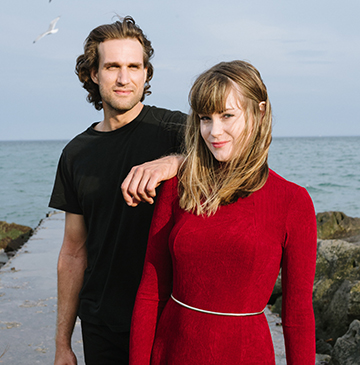 “Really loved it… Catchy, sweet, lovely…” — Music For Your Heart

“I LOVE it. You guys are the best… Adore your music!” — alexrainbirdMusic

Sometimes, bad times help us remember better times. It’s a circuitous path to happiness, to be sure. But it’s the one taken by Toronto pop-folk duo In the City on their new single and video “Best Time” — available now.

Although it was inspired by the untimely and unexpected death of singer Ashley Jane’s mother last year, the song — a preview of the pair’s forthcoming concept EP MaryAnn — chooses to celebrate life rather than mourn loss. “It’s really a song that she’s singing to my dad,” explains Jane, who splits musical duties with multi-instrumentalist and studio whiz Timon Wientzek. “I was really grappling with the idea of grieving for someone you’ve lost and how you can get really swept up in the tragedy of it. It’s really easy for that to become how you remember someone.

“But the storyteller in me was saying, ‘No, if your mom was still here, I think she’d tell all her friends and loved ones that she had the best time while she was here.’

“Our amazingly talented director came up with the concept,” she continues, speaking of “Best Time”s video and its director, Anna Maguire. The band plays throughout in front of projected home videos. “We wanted to create a video that celebrates life, both its everyday moments and big momentous occasions. The footage is from lots of different families. We received submissions from all over the world, and feel honoured to include these precious memories in our music video.”

The song’s rich musical landscape mirrors the uplifting grace of the lyrics. Opening with a lone acoustic guitar, it seamlessly builds and expands to a rousing, widescreen two-step with fluttering mandolin, lush keyboards, handclaps and even trumpet flourishes — all topped by an endearing chorus buoyed by Jane’s warm, sweetly trilling tones. Bold and ambitious, mature and dynamic, Best Time heralds the next stage in the autonomous young duo’s rapid evolution as songwriters with exceptional chemistry and a unique approach.

They found that groove when they found each other some four years ago. Singer-songwriter and documentary story producer Jane was with a non-profit that empowered kids through music. Composer Wientzek worked in the studio where they were recording. Their backgrounds were diverse — she grew up twirling in a backyard skating rink as Joni Mitchell, the Rankin Family, Fleetwood Mac and Shania Twain blasted from outdoor speakers housed in Tupperware to thwart squirrels; he absorbed the sounds of everyone from Bon Jovi and Limp Bizkit to Radiohead and even Backstreet Boys (“I really enjoyed the production and the harmonies,” he swears). Ultimately, their differences proved to be great strengths.

“Musically speaking, I come from more of a rock background,” Wientzek says. “Ashley is more from a singer-songwriter background. But somehow they mesh well together into something that works. We have the sensibility to write sensitive material, but not make it overly cheesy, overly pop.”

They made that apparent on their 2016 EP Changing Tides. Assembled in Wientzek’s home studio, its beautiful melodies, emotionally resonant narratives and soft cinematic sonics won over the Canadian film and TV industry. Their music has been showcased on CBC’s Heartland, Kim’s Convenience and Workin’ Moms, along with CTV’s Saving Hope, commercials and award-winning independent films. This summer, they undertook a songwriting residency with the Slaight Family Music Lab at the Canadian Film Centre. The multi-media approach has left them in a unique position: They’ve heard their songs on screen and online but not on radio. Still, the determinedly DIY duo are right where they want to be.

“It’s been a weird thing,” Jane says. “But I think it’s just such an exciting time to be an artist, because you can kind of make your own rules … We do everything ourselves. We record ourselves, we produce the songs ourselves. It’s the two of us in a room. There’s so much autonomy we have with our sound and with the choices we make. And we’re charting a course that feels unconventional — finding an online audience and doing things our way. Whatever road embraces us, we’re going to run with it.”

“Best Time” is available now.
We would like to thank Eric Alper for the artist profile and press release.