Stacey Kay is a “New Type” of public personality with a fresh new attitude about the music industry.

The Toronto-based award-winning singer-songwriter just released a new “video-meets-manifesto” celebrating self-confidence and challenging beauty standards across the board.

“It’s my goal to change the world’s mentality about what they’re programmed to think is beautiful. 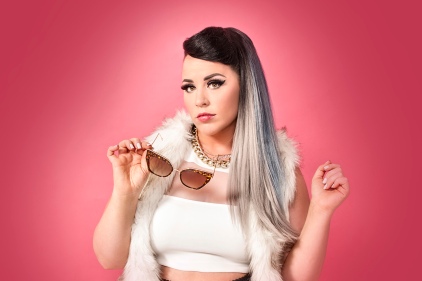 “A few years ago, I met with a ‘big wig’ in the music industry who said I had to lose 90 pounds, get a space between my legs, and change my hair and my clothes. He told me the way I looked wasn’t accepted in the ‘pop music industry’ and it was going to be too hard for me.

And it wasn’t an isolated incident – others said similar things to Kay and maybe now they’re learning how misguided they were.

It may be her debut solo album, but Kay is no stranger to the scene; in addition to high praise from judges Howard Stern, Heidi Klum, Howie Mandel and Spice Girl Mel B as an advanced contestant on Season 10 of America’s Got Talent, the Cambridge, Ontario-born artist has also performed with Stevie Wonder’s band at a David Foster concert, k.d. lang at the Canadian Songwriters Hall of Fame Induction Ceremony, The Tenors at the Toronto International Film Festival, and Cee Lo Green. She was a member of the award-winning a cappella group, Eh440, and starred in the Broadway National Tour of Godspell.

Stacey’s unique and powerful voice paired with a machine-gun rapping style has garnered her online videos millions of views, including one particular viral sensation — over 40 million views when she spontaneously performed one of Busta Rhymes’ fastest raps in the aisle at a Walgreens in South Carolina.

The video was shared instantly, and Chris Brown wrote an article about her talents on his website. Kay’s covers of hit songs have garnered the respect and recognition from the original artists including Meghan Trainor, Iggy Azalea, Jennifer Hudson, and Mystikal, who have shared her videos on social media.

Recently, Stacey Kay was excited to learn that one of her influences, Fergie, featured her in a Glamour Magazine video.  The video shows Fergie watching a Stacey Kay cover of her song You Already Know while raving about Kay’s vocal ability and charisma.

“I’ve never been a fan of the saying ‘it’s what’s on the inside that counts’ because then that implies that the outside may not look good. I’ve always thought that so many people of all different shapes and sizes are hot. So why do I think that I have to look different for people to think I’m attractive?

“Just because most people who are famous have a similar look, it doesn’t mean it has to continue being like that,” Kay says. “It’s 2018 and humans have made a lot of positive changes, so why not make a change about what we’ve been brainwashed to think is beautiful.

“I’m not here to try and make you cry or feel bad for me,” Kay says. “Finding your confidence can be a really fun and exciting thing and it can be both powerful and lighthearted at the same time. That’s why I made this video.”

We’d like to thank Eric Alper for the press coverage.