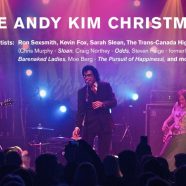 By Sally Warburton
Andy, I’d like to start by congratulating you on your recent Induction into Canada’s Walk of Fame.
Growing up in Montreal – the son of Lebanese immigrants –
Thinking back to when you were a 16 year old in Montreal and you took the bus to New York City with $40 in your pocket– arriving at the Brill Building – Did you ever imagine that over 50 years later you’d be the recipient of a Gold record, have many top hit songs, have your most famous song Sugar Sugar connected to the Archies comic – the most popular comic at that time for the boomers, be a Juno Award Winning Male vocalist of the year (1970), be recipient of Canada’s Walk of Fame and that your songs would still be as popular as ever today on the radio?
NO. I think every moment is THAT day. I feel lucky and blessed. Basically, I’ve never taken a bow for my achievements.
You’re in Los Angeles on the 405 highway going south. .. one person in the car cranks up the volume to listen to the song…. Then going north on that same highway someone screams and turns off the radio.. You can’t make people like music.. Not every song you like write will be liked…. For music fans, there are songs you like and songs you don’t like. As a songwriter, you never know if people will like it…. We can’t expect all people to like your music.
This meaningful quote… Mark Twain quote: “There’s a day you’re born, and there’s a day you find out why.”
Andy thrilled and happy ….It’s up to the gods of the universe . Do the songwriting for the right purpose – to create something that excites you.
Writes, loved and cared for…
Expect what they believe their purpose is: Somehow you’ll be heard…. Music is a matter of taste.
Andy doesn’t reminisce on the past… Wow 50 years! So much no “blue print” one can follow…..
Music is a matter of taste . When Sugar Sugar first came out no one wanted to play it. Then when a San Francisco radio played it. Well then it was HISTORY. 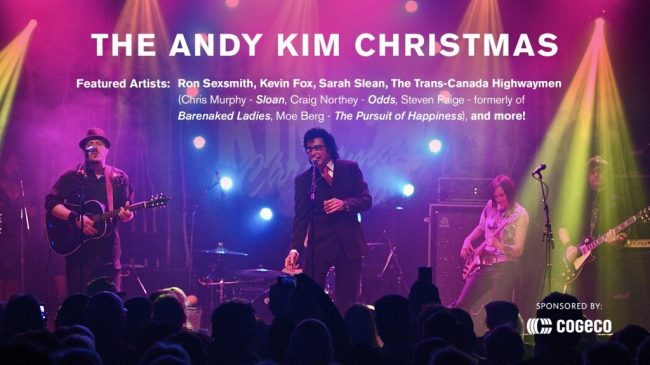 “We save the best for the last, they say.” Andy, your Canada Walk of Fame award was the last to be presented at the Sony Centre on December 1st. That gave you the opportunity to see the others who were inducted ahead of you. You were sitting among 2 former Prime Ministers – Steven Harper and Brian Mulroney – the latter who was to go on to give probably one of his most widely heard speeches in his life the following week at the funeral for former President Bush Senior. You were sitting amongst Geddy Lee & Alex Lifeson of RUSH one of the biggest bands worldwide in rock history. With the Kielberger brothers of We to Me Fame. Did you ever imagine that you’d be inducted into Canada’s Walk of Fame – along with other well-deserved inductees? At the same time as Colonel Chris Hadfield the most media savvy astronaut ever. With one of the most successful businessman ever – Jimmy Pattison, with multi-gold medalist skaters Tess and Scott and successful actress comedian Andrea Martin?
Andy: When discussing Prime Ministers – the list of people in attendance….We are all mortals. You have to think Did we enjoy this moment in time? Did we understand how the process works?
NERVE RACKING going last! ….to follow people who’d had dreams, read, interested …who excel that way… and who gave such excellent acceptance speeches!
20th year of Canada’s Walk of Fame – COOL, that it was the 20th year!
Alex Lifeson is a friend. He’s done my Christmas Show three times. Alex embodies a spirit beyond music. He’s part of a community of artists. 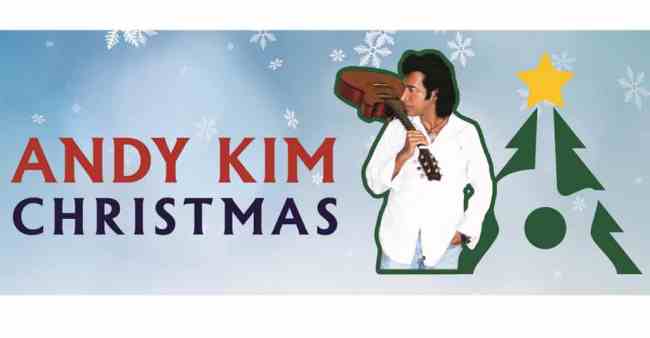 How did it feel to have Andrew (Loog) Oldham present you with your Canada’s Walk of Fame at the Sony Centre on Dec 1st? and to say about you that he was “proud to induct a brother in arms”. In the presentation it was said that Jeff Barry – the co-writer of Sugar Sugar “Took you under his wings.” at the Brill Bldg in NYC.
…Andy; to have Andrew Loog Oldham …Rock and Roll Hall of Famer….fly in from the UK to present Andy with his CWF award at Sony Centre was unbelievable! Oldham managed the Rolling Stones and their early songs. …. Andy had to take it all in …. “Is this really going on?” and then to have Colonel Chris Hadfield (astronaut) offer to come Dec 5 to be a surprise guest at Andy Kim Christmas Concert….
How did you feel about seeing the Bare Naked Ladies perform at the Canada Walk of Fame Awards. ( A brilliant and fun song they’d written for Chris Hadfield about his space career
A s tronaut! ) Ed Robertson of BNL was the one who convinced you to come out of retirement. So that must have been a nice touch having Ed Robertson and BNL be part of your CWF induction ceremony. Andy, you were glowing and appeared naturally quite emotional when giving your acceptance speech… You said you were “Lucky and blessed to be born in Canada.” And that you’re “honoured to be here.”
What a beautiful music tribute given to you by Devine Brown, Jully Black and Maestro gave a wonderful song tribute to you, Andy, singing Baby, I love you and Sugar, Sugar
Andy answer: The Colonel Chris Hadfield (the Colonel) said it’s about time! …AK learned as a kid the motto: God is always on time.” No matter how much you push — I’m gonna do the best I can… Devine Brown, Jully Black, Maestro singing tribute to AK at CWF awards…it doesn’t get any better than that….!!! I couldn’t have planned this, this wasn’t in the cards.
Andy thought the song written by Bare Naked Ladies as a tribute to Colonel Chris Hadfield was brilliant. (Canada’s walk of fame award Dec 1st)
Ed didn’t pull AK out of ‘retirement’…. AK was NEVER in retirement… he says of himself that he had become IRRELEVANT Ed Robertson went from being a stranger to a friend…The magic of writing a song together.. Ed produced the song… Andy Kim is so grateful to Ed Roberton of Bare Naked Ladies… so much that Ed gets tired of Andy Kim thanking him.
Think about Tom Petty…. His calendar would’ve been filled before he died, he never gets to fulfill those calendar events….never do the things he wanted with his grandchildren…
Do the best you can everyday. No failure grade.
No matter where I went I was known as Canadian. Canada’s spirit in all of us.
Andy Kim – His childhood – his parents created his sense of Community, parents, immigrants to Canada
To fit: US Rock & Roll World…fulfilled life..
Andy Kim is very modest about his achievements. His important trait is his giving nature – He’s visited orphanages, and helped sick kids, He always tries to do something to meet the kids. Someone out there is hurting…. Helping by strength of music.
Your Andy Kim Christmas Concerts have become an annual event for the past 14 years…… Your concerts are filled with musical talent.. including of course your own… How did you become such a generous person that you wanted to give back so much to the Community by having these annual fundraiser concerts?
For example one of the programs you help sponsor is CAMH – Gifts of Light program – such a good program for brightening the lives of those affected by mental illness. We thank you for all you’ve done.
Answer: The Andy Kim Christmas show was going to just be ONE time. Andy lost his voice the first show…. It was only supposed to be One time. Then the following year Andy received a phone call: You’re doing your show again?! (2nd year)
The Andy Kim Christmas show started with Ron Sexsmith – they became friends, charity. 2nd person contacted was Hayden Neale of Jack Soul. It mushroomed from there…Each musician said yes. Started at the Mod Club – Andy Kim attended an event at Mod Club and loved the sound system and way it felt and called and met Bruno. Artist line-up. Contacted Riley at Live Nation. Andy Kim makes sure the Artists Musicians are happy who participate.. the gift that keeps giving…. It’s hard to believe that Alex Lifeson is on stage playing my song… Give me a break!! Line-up this year Dec 5 is insane! Bif Naked – met a Canadian Music Week. Hayden – incredible talent. Mary Margaret O’Hara – in May reached out to her. Kim Mitchell – accidentally ran into him and he said he’d be part of the show. Alex Lifeson wanted to be part of it. Billy Talent – Yes. Broken Social Scene – Yes. You ask and they will show up. Unplanned. Spontaneous. (Burlington?? Kevin and Tammy Fox?) I stand back and say OMG… the Colonel says I want to do your show…surprise guest!! There’s a bigger power – Honest and Just and Helping…
Important – Why we’re doing it…
Starlight Foundation – Montreal
Kevin – Burlington BPAC’s Golden Ticket program
Ron Sexsmith
To say I love Kevin Drew is an understatement.
I can’t be anyone else. Be the better part of (me?)
Andy Kim– Basically about people….We have the ability to love unconditionally and care… with no other purpose.
Always an honour to help other people. This time of year is filled with ability to understand how lucky we are (Xmas time)
See the luck and the blessing. 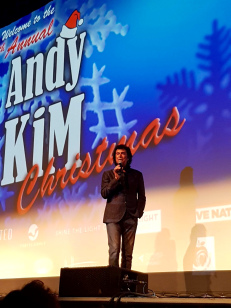 Included in your Andy Kim concerts are some of the biggest names in Canadian music industry – on stage December 5th there were Tom Cochrane, Kim Mitchell, Alex Lifeson – all the Canadian guitar gods. How to you manage to have them be such a wonderful part of your Annual fundraiser concerts? 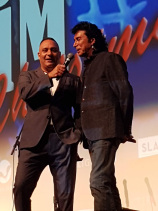 You have a close relationship with Ron Sexsmith and Kevin Drew (Broken Social Scene) … How does this make you feel being a sort of mentor for younger (this generation of ) musicians? Do you see yourself in these musicians?
Not only friendships but collaborations in music… From an audience member – whether at the Mod Club, the Phoenix or most recent years at the Queen Elizabeth Theatre – In the audience, we all see the respect and admiration ….and joy which the musicians have – in being part of the annual Andy Kim Christmas concert show. And I’d just like to end by saying THANK YOU and Congratuations on that we have all been HONOURED to attend your concerts, your annual Christmas concert show fundraisers and to have had you in our lives musically and WE are the ones who are very happy that you were born in Canada too.
Your Burlington Andy Kim Christmas Show first time in Ontario OUTSIDE of Toronto. Are you expanding your shows? Some different Canadian musicians.. including of course Ron Sexsmith and then The TransCanada Highway Men including Steven Page formerly of BNL, Chris Murphy of Sloan Craig Northey and Moe Berg at Burlington Performing Arts Centre – supporting access to professional entertainment and artistic workshops to underserved schools and students in Halton Region. Congratulations, Andy, and thank you very much for taking the time for BK on the Scene today. 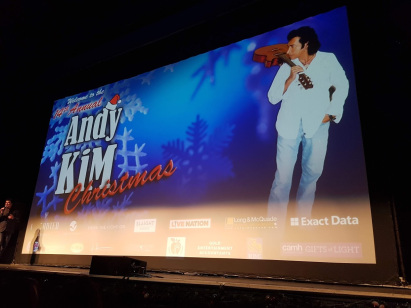 We would like to thank Ms. Damien Nelson
of – Want & Able Arts Consulting for the invitation to interview Andy Kim and we look forward to covering his show in Burlington.