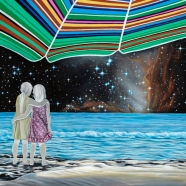 On Saturday, February 23, downtown Los Angeles’ Corey Helford Gallery is proud to present their next major group show, titled Psychedelia, in the Main Gallery. Humphry Osmond (the British psychologist and inventor of the term “psychedelic”) once stated, “To fathom Hell or soar angelic, just take a pinch of psychedelic,” referring to the ingestion of LSD and psilocybin.

The trippy art style of the 60’s was inspired by innocence – flower power, peace, love, and LSD. Leading proponents of the 1960s psychedelic art movement were San Francisco poster artist; such as: Rick Griffin, Victor Moscoso, Bonnie MacLean, Stanley Mouse, Alton Kelley, Wes Wilson, and Peter Max. In Psychedelia (a re-interpretation of the beauty and innocence of drug-inspired art), over 40 international artists present new works that evoke the same feeling of transcending reality, of the universe inside the mind, and the joy and innocent beauty that filled the nouveau-ish, acid-fueled period of art, literally defining the clothing, advertising and counterculture of the time.

The roster for Psychedelia includes:

Regarding their contributions to the show, Jonathan Viner, Kristen Liu-Wong, and Nicole Gordon share:

Viner: “I approached the psychedelia theme from a ‘bad trip’ angle. Like a scene we would see just before waking up from a fever dream. My piece was inspired by some grainy video stills I came across years ago. They captured a choreographed dance routine in which nude female performance artists wielded toy swords while wearing masks of Disney characters. The armed, nude figure in the iconic Snow White mask seemed like a compelling juxtaposition, particularly in our current social climate. “

Liu-Wong: “The first time I took shrooms, I was visiting friends on break from my first year away at college. It felt so nice to be back with people I really knew after moving away to New York and we wandered around parks and a lake and went near the zoo and at one point we were all just amazed at how ‘shit be movin’ (which is why I named my piece this). I remember feeling in awe of the universe and how lucky I was to have shared this special, magical moment with my friends. For this piece, I wanted to evoke that same sense of joy and magic while at the same time expressing the comfort and ease I felt with my friends that first time.”

Gordon: “Coming and going from little places of beauty affords us relief from the stresses and worries of everyday life. These beautiful places can in the physical world but can also be accessed within our own minds. While it is not possible to remain in these places forever, finding these moments of escape can give us the perspective to engage with the world in a more meaningful and productive way.”

Psychedelia opens Saturday, February 23 from 7pm – 11pm in the Main Gallery. The reception is open to the public and the exhibit will be on view through Saturday, March 30. The space is open Tuesday – Saturday, 12pm – 6pm. Corey Helford Gallery is located at 571 S. Anderson St. Los Angeles, CA 90033.

About Corey Helford Gallery:Corey Helford Gallery (CHG) was first established in 2006 by Jan Corey Helford and her husband, television producer and creator, Bruce Helford (Anger Management, The Drew Carey Show, George Lopez, The Oblongs) and has since evolved into one of the premier galleries of New Contemporary art. Its goals as an institution are the support and growth of young and emerging, to well-known and internationally established artists, the production and promotion of their artwork, and the general production of their exhibits, events and projects.

After nine years in Culver City, CHG relocated in December 2015 to a robust 12,000 square foot building in Downtown Los Angeles, where it continues to host exhibitions within the heart of the city’s art community. The current space boasts three separate galleries, each of which house individual artist and group exhibitions, whereas the main gallery offers 4,500 square feet, providing total immersion for its attendees. New exhibitions are presented approximately every five weeks. For more info and an upcoming exhibition schedule, visitCoreyHelfordGallery.comand connect onFacebook,Twitter,Instagram, andYouTube.