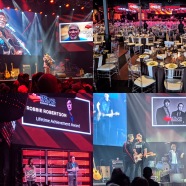 By Wayne Baggs
Canadian Music Week held its annual Celebration for the Canadian Music and Broadcast Industry Awards May 9th at the Rebel. The 3-hour gala dinner honours the Music Industries innovators, and achievements as recognized by their peers. The event was full, with approximately 750 guests from all corners of the music business. All the big players are here. The special lifetime achievement honours are a big part of the Gala, presented thru-out the evening between the live acts and award winner announcements. Thirty-seven of these awards were announced on the screen without much ado. The Canadian Music & Broadcasting Industry Hall of Fame inductees, of which there are 3, on the other hand, are given the full treatment. This year’s inductees include Michael McCarty whose credentials and leadership in the music industry make for an easy induction. He is the Chief Membership and Business Development officer for SOCAN, for many years before that, the head of EMI Music Publishing Canada. He was inducted into the Hall by Glass Tiger singer Alan Frew. McCarty several times mentioned great songs and their writers for his inspiration and success. He also mentioned his inspiration from Jack Richardson. “He showed that Canadians can have global success in the music business and inspired me to believe that I could do it too,” He also added “I figured he must know the secret to making a magic record, so I decided I was going to find him and learn the secret or die trying.” He got his start with Richardson after attending Fanshawe College for recording arts. The second Hall of Fame Inductee is a great leader in the touring and booking side of the biz. Steve Herman, SVP of touring at Live Nation. Steve’s speech was humorous and gracious. Now at the top of the game, he proudly mentioned the people that helped him get there. From family, his dad was there, to music industry greats like Bruce Allen, Gary Slaight who inspired him to work hard. He mentioned the late Joe Summers and Dan Gallagher. With an extra mention to his partner, Live Nation CEO Michael Rapino. Like McCarty, he added “The most important thing is to thank the artist because they’re the ones that gave me the opportunity and there’s one artist — and I don’t know how it happened — but it was Prince, and every day he was a real asshole. He inspired me and made me work harder and I don’t think I’d be here either if it wasn’t for him, so thank you Prince”. Emotionally recalling his youth, Steve reminisced about being a young boy dreaming of living a rock star life in the Hollywood Hills. “But soon after I realized I was a really bad guitar player. I started promoting — but now I live in the Hollywood Hills,” bringing the biggest laughs of the night. The 3rd inductee is Robbie Robertson, receiving a well deserved Lifetime Achievement Award. Being one of the worlds great songwriters, guitar players having spent almost six decades making and promoting music is why. He was not only a Band member but also a musician that promoted music from many genres. He also worked for Geffen records briefly. His awards and accolades are many, google his name. Wow. He mentioned that he is still busy. Working on part 2 of his memoir, part 1 Testimony released in 2016, and finishing up on a new album coming out shortly. Anticipation for the new release was upped by Robbie adding that he thinks it is the best work he has done. Now that’s saying something. I’m looking forward to it. The other Live presentations included the Allan Slaight Humanitarian Spirit Award bestowed upon the late Gord Downie. Reconciliation with First Nations was a big cause for Gord helping set up The Gord Downie & Chanie Wenjack Fund. Gord’s brother Patrick Downie accepted this award. Adding “This award will always be a very special, important piece for his legacy, he represented so much to so many people, his body of work and the impact he continues to make both as an artist and that activist speaks for itself, but nonetheless is always hard for me to try to encapsulate. In the context of this award, however, it’s very easy to reference how deep Gord’s humanitarianism went. If you knew him, you could see it in his daily life, far away from the spotlight. It really was the core of who he was. I’m not sure if Gord ever considered himself a humanitarian or not. With him, I think it was much simpler than that. Gord just wanted to be known as a guy who gave a shit — his words. He admired the hell out of anyone who made that their living. And he knew, most importantly that it was his responsibility in life. And in death. And he treated it like one. It’s a responsibility our family proudly carries on his name.” This award comes with a $30,000 donation from the Slaight Family Foundation. Well done! 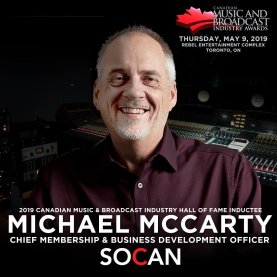 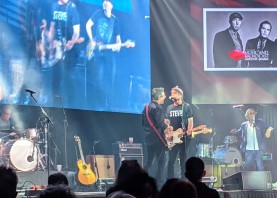 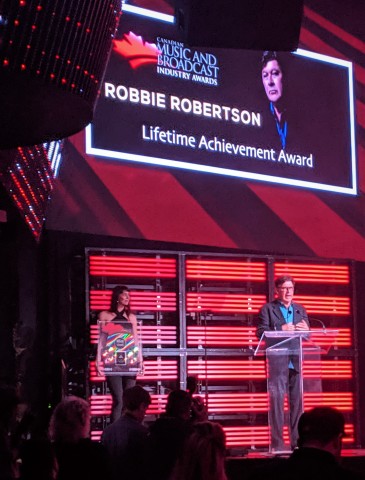 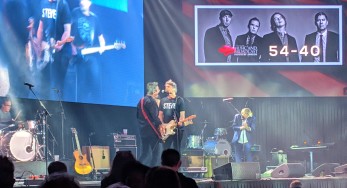 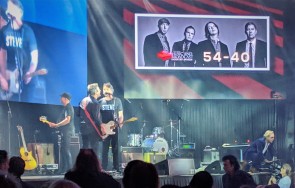 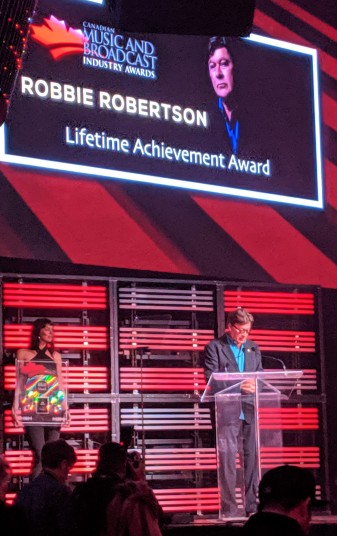 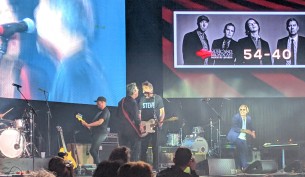 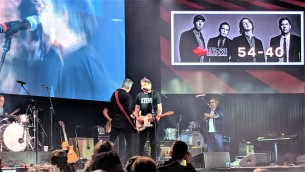 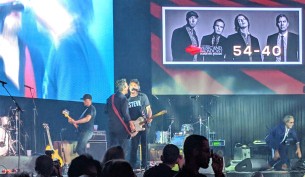 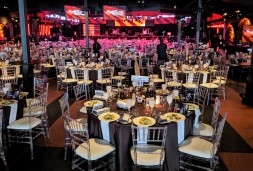 The 2019 Broadcast Industry Hall of Fame inductees are Guy Brouillard of CKOI, Gerry Forbes of CJAY 92 and “The Champ” Brother Jake Edwards now of TSN 1050. All have spent decades broadcasting from all parts of Canada. For each inductee we watched a video highlighting their careers followed by their acceptance speech and presentation. All were humorous and thankful. Also honoured, Leslie Sole and Terri Michael tragical killed last Nov in an automobile crash. in memoriam, by also being inducted into the Hall of Fame. Their son Jonathan was on hand to accept the award. Brad Karp from country 93.3FM in Fort McMurry was the recipient of the Allan Waters Young Broadcaster of The Year award in memory of the legendary radio programmer. Canadian Songwriters Hall of Fame and CMW honoured and celebrated Eddie Schwartz. CSHF founder Frank Davis presented the award to the writer of hits like “Hit Me With Your Best Shot” This song was performed live by Gowan as was Eddie’s song ”When There Is Love”. A crowd favourite. Carmela Laurignano, a most wonderful lady, was the recipient of the Rosalie Award. Presented to women in the Radio industry who have led by example. Making a difference in the business as been Carmela’s skill since joining the Evanov Radio Group over 25 years ago. As Vice President and Group manager, she is still making inroads. Congratulations. The events live performances included starting the night with the Indigenous Youth Hand Drum Group. Later the likes of Jonathon Butler, Logan Staats, 54:40 and The McCarty band made up of Esthro’s Gavin Brown, guitarist Ian Michael D’Sa and singer Ben Kowalewicz from Billy Talent with members from Three Days Grace and Alexisonfire thrown in to round things off. The 54:40 set was visited by a particular fan trying to pump the crowd. A great night for the Canadian Music and Broadcasting Industry Awards and Canadian Music Week.
The Canadian Music and Broadcast Industry Awards also recognized the following winners:
MUSIC DIRECTOR OF THE YEAR MAJOR MARKET
Lisa Grossi – CHUM FM – Toronto

PERFORMING ARTS CENTRE (over 1500)
The Sony Centre For The Performing Arts, Toronto