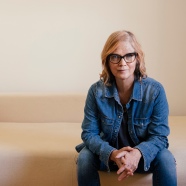 “It’s like a deep acceptance of oneself — a big blue sky,” says Canadian singer/songwriter Laura Repo on her newest folk-pop album — the decade-in-the-making missive, This Is My Room — available now. “That’s what this album feels like to me.”

Her fourth full-length release, This Is My Room sees Repo exploring new musical avenues with producer Tino Zolfo (Hawksley Workman), who she met at their local coffee shop, The Common, and recorded demos with back in 2009.

Little did either of them know that those demos would lead to a full-length album almost 10 years later.

This Is My Room’s vocals — which are lower, Repo says, and more cool and conversational — weren’t about perfection. They were about feel and serving the song. “Many of my vocals were recorded in one take, as if the songs had a mind of their own,” Repo says. There are even two songs from the ten year old demo sessions that were left intact for the release, title track “This Is My Room” and “Too Soon To Miss You.”

The result is Repo’s most upbeat, poppy, eclectic album to date with big funky horns, arranged by Zolfo, and played by Rebecca Hennessy (trumpet and flugelhorn) and Tom Richards (trombone) on songs like gorgeously breezy instant classic “Just A Friend” and rhythmic, sparsely bombastic “Power Of The Night.” Elsewhere, the new album is bassy and psychedelic, as on opener “Country Girl,” which is an homage to Everdale Place, where Repo went to school from the age of four to seven (her father taught there and was one of the school’s founders); visits a zydeco party for “Too Soon To Miss You” with Tania Gill on accordion, reimagines girl group songs on “Johnny Finn,” in which Repo urges an ex to “let your love in,” visits Montreal on down-tempo “Wednesday,” and arranges feelings while sorting out the house on “Perspective,” a brilliant song.

“The launch started like a poetry reading,” she recalls; the album was kicked off this past fall with a successful crowdfunding campaign that both exceeded its goals and included Repo’s homemade granola in its perk list — a win/win for everyone.

With her cousin — actor Liisa Repo-Martell — reading poems to the sold-out room from O Motherhood, the poetry chapbook made especially for high-tier backers, the expansive ethos that is Repo and all she represents enjoyed a full-circle moment.

A dynamic force in the motherhood support and pre/post-natal care space, Repo also hosts Write On Mama, a writing group for mothers. “This is what I’m trying to create for other mothers, a space that can pull out art making from simply writing in a journal, even if it’s only once a month,” she offers. “And even if it doesn’t lead to art making, it has been a valuable space for just staying anchored in one’s own voice.”

The group came together in 2012 when Repo put together a weekly session called ‘Writing Through the Twilight Zone’ for mothers with babies, who came once a week to write. From her own experience raising a child, she knew the value of a writing practice as a way to process the challenges of motherhood. The group continues to meet weekly, and is essentially a quiet space dedicated to encouraging a writing practice.

In addition to helping other mothers formulate thoughts through their fog, she also assisted herself. “My group actually helped keep my own songwriting moving forward,” she reflects. “I wrote ‘Country Girl’ as part of a session I did on the songs of Bon Iver. His song, ‘Blindsided’, pulled out the lyrics to my song, almost from thin air.”

Following a long wait after 2011’s critically acclaimed Get Yourself Home — which was produced by the Foggy Hogtown Boys’ Andrew Collins and nominated for a JUNO Award for best cover art — This Is My Room sees Repo exploring new musical avenues with producer Tino Zolfo (Hawksley Workman), who she met at their local coffee shop, The Common, and recorded demos with back in 2009. Little did either of them know that those demos would lead to a full-length album almost 10 years later.

The release of Get Yourself Home coincided with some hard times for Repo: her father died suddenly in 2012, followed four years later by her son Sami’s father, Paul, who passed away from cancer. “During that time I got to know something about grief and how it can take your voice away,” Repo says. “The sensation of not wanting to open my mouth to make a sound and the strangeness of not being moved by music was new for me.”

Gradually, joy came back to her.

“I discovered something new about music in the quiet time,” Repo says. “That singing is about finding a thread attached to hope, something like singing for the spirit of music itself, filling that well, wherever it exists.”

This Is My Room is available now.

We would like to thank Eric Alper for the media release.