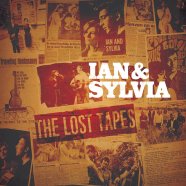 TORONTO, July 17, 2019 – July 1959 was a pivotal month for the history of folk and country music. It was when Ian Tyson met Sylvia Fricker for the first time, which began a musical journey, both as a dynamic duo and with distinguished solo careers, that would help put Canadian country music on the map globally. In honour of the start of this historic musical collaboration, Stony Plain Records will be releasing Ian & Sylvia The Lost Tapes on  September 6th; the day after their much-anticipated inductions as individual songwriters to the Canadian Songwriters Hall of Fame, which will be presented on September 5th at Studio Bell, home of the National Music Centre, during Country Music Week in Calgary, AB.

“Ian & Sylvia were pioneers of the singer-songwriter movement – a genre firmly established today because of their leadership,” said Vanessa Thomas, Executive Director of the Canadian Songwriters Hall of Fame. “As a performing duo they were superb, and it was apparent through their second album that they wanted to announce their strong individual songwriting skills as well, which continued to drive their authenticity throughout their music careers spanning more than six decades.”

During the ‘60s and ‘70s, as the folk-singing duo Ian & Sylvia, they were among North America’s leading singer-songwriters, achieving commercial and critical success and recording 13 studio albums.  The duo performed their hit songs for U.S. President Lyndon Johnson’s 1964 re-election campaign, at the Hollywood Bowl, Carnegie Hall and Town Hall in NYC; as well as appearances on television’s “Hullabaloo,” the Johnny Cash Show, Steve Allen Show, Mike Douglas Show, and the BBC.

Their folk standards “Four Strong Winds” – deemed by the CBC to be the “most essential” piece of Canadian music – and “You Were on My Mind” were inducted into the Canadian Songwriters Hall of Fame in 2003 and 2007 respectively.  Ian penned “Four Strong Winds” after an evening with Bob Dylan, and Sylvia is credited with “You Were on My Mind,” making her one of the few female folk artists to write a major song in that genre at the time, which was remade in 1965 by American folk-rock quintet, We Five, to become a worldwide #1 hit single. Both songs, solidified their individual status as hit-making songwriters.

While Ian & Sylvia’s catalog is filled to the brim with stellar music, the release of Ian & Sylvia The LostTapes  is culled from newly-discovered concert tapes from the early ‘70s, and never-before-heard versions of country and pop classics, cementing their reputations as  performers  who pushed  the boundaries of folk, blues, country, rhythm and blues, and rock ‘n roll.  Much of their best-known repertoire is superbly represented here including “Four Strong Winds,”  “Summer Wages,” “Crazy Arms,”  “Four Rode By,” “Little Beggar Man,” “When First Unto This Country,” and “Darcy Farrow” reminding fans of what they were able to do best – blend influences from folk and country on the way to be widely considered two of the eras greatest songwriters and musicians.

“The pivotal role of Ian & Sylvia in music history may be their refusal to  be trapped in the patterns of their past as one of the leading acts of the ’60s folk era,” notes Canadian music industry journalist Larry LeBlanc.  “Along with the Byrds, Gram Parsons, Bob Dylan, Linda Ronstadt, Waylon Jennings, and Willie Nelson, Ian & Sylvia laid the foundation of Canadian country music and Americana music that evolved as a recognized source of popular culture.”

Ian, who loves the cowboy way of life living on his ranch in Longview, Alberta, performs his own Western influenced repertoire;  Sylvia continues to have a fascinating, and still-thriving solo career while performing, writing, and recording with Quartette with Caitlin Hanford, Cindy Church, and Gwen Swick.

For this  richly rewarding retrospective complete with liner notes written by Larry LeBlanc,  Sylvia and producer Danny Greenspoon picked unreleased performances that Sylvia had discovered while assembling memorabilia for the National Music Centre in Calgary.

On September 5th with the country music industry gathered in Calgary for Country Music Week, Ian Tyson and Sylvia Tyson will receive their individual distinctions in the Canadian Songwriters Hall of Fame at Studio Bell. The release of Ian & Sylvia The Lost Tapes will be released on September 6th, and available for pre-order here.

About Canadian Songwriters Hall of Fame
The Canadian Songwriters Hall of Fame (CSHF) honours and celebrates Canadian songwriters and those who have dedicated their lives to the legacy of music, and works to educate the public about these achievements. National and non-profit, the CSHF is guided by its own board of directors who comprise both Anglophone and Francophone music creators and publishers, as well as representation from the record industry. In December 2011, SOCAN (the Society of Composers, Authors and Music Publishers of Canada) acquired the CSHF. The Hall of Fame’s mandate aligns with SOCAN’s objectives as a songwriter and publisher membership-based organization. The CSHF continues to be run as a separate organization.www.cshf.ca.

We would like to thank Eric Alper for the media release.