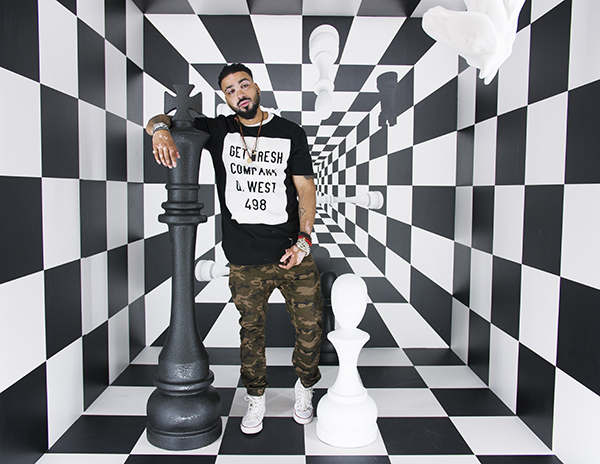 “This is a departure from my last album,” Haran notes ahead of the track’s forthcoming video release. “It’s a more fun, witty and clever side of me.

“Despite being stereotyped all over the world, ‘HBSL (Hot Boy from Sri Lanka)’ is a representation of the beauty and glamour of Sri Lanka!”

The EP the track will reside on is also a departure for Haran. “I’ve let go of all my worries and neglects and moved onto more of a dark, comical side that shows more of the sins, my thoughts and my upbringing,” he shares.

Haran is referencing last year’s debut EP A True Story: A Soundscape to In-Difference, the 10-track conceptual album that delivered a real, raw, truth-telling tome touching on his history being a Parisian-born Sri Lankan refugee, having vitiligo, and painful childhood memories of being used as a drug mule, and experiences with depression and abuse.

“This album, I’m thinking of naming it ‘Scar Lanka’,” he continues. “It’s more of a split personality and showing my flaws and having fun with it. Talking more about things I can relate to, that being the upbringing of my young adult years, being around drug dealers, studios, snakes, ballers, women… And understanding loyalty.”

// ABOUT MARCUS HARAN’S DEBUT ALBUM, A TRUE STORY: A SOUNDSCAPE TO IN-DIFFERENCE

Last year’s 10-track conceptual album stood strong as Haran’s debut EP, and is a real, raw, truth telling tome amidst a 360 degree immersive soundscape. Inspired by the vast symbolism — ancient, Vedic, astrological, energetic and numerological — of planets in the universe, Haran’s otherworldly sound traces his cultural roots and journey into Toronto, including jazzy hints from Paris, chopped up flutes from Sri Lanka, and a street Toronto vibe that you just can’t help but move to.

The compelling story behind Haran includes being a Parisian-born Sri Lankan refugee, having vitiligo, painful childhood memories of being used as a drug mule, and experiences with depression, abuse, and skin. Haran has harnessed this life experience and then some to tell his story of overcoming adversity; his social movement is In-Difference, where all differences are celebrated, owned, and encouraged to create a brighter, brave new world.

“It’s an album based around all my trauma and downfalls in life,” says Haran on A True Story: A Soundscape to In-Difference. “It’s about bringing them to light and focusing on the characteristics of the planets that have been a representation of everything I’ve been through.”

Told from the chronological perspective of childhood to present day, the intros create a direct relationship with the audience and provide insight into the mind, emotion and timeline in that leads to each track. In “Saturn” audiences hear coming of age challenges; the track speaks to a memory Haran uncovered with Umbereen (MSW) during their creative writing process where Haran would hide in the closet, witnessing abuse, and how he used the light of the world to get beyond it. “Saturn was that moment with my father…” he recalls, “and running away from the abuse.”

The red-hot storm that is “Jupiter” represents Haran’s experiences with his skin condition vitiligo and his ability to overcome what could be perceived as obstacle by accepting and loving himself. “Jupiter’ represents being able to face my fears and breaking through and shedding a layer of my old skin in order to love and accept my new.” “Pluto” — being the planet of change — represents a new turn for Haran where he embarked on a spiritual and grounding journey, understanding it was his pain and adversities that led him to want to inspire and help the world. “Venus” serves as the universal symbol of love. “Venus’ is the understanding and accepting of how to love myself before others,” he says, speaking to the ultimate gift that is the true guiding light and force in Haran’s life. In Roman mythology, Mars is depicted with a spear. “This planet depicts how I overcame huge obstacles — fighting through situations and emotions which could have ended it all. In ‘Mars,’ it shows I’m asking life for another chance and apologizing for being late.”