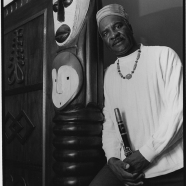 Legendary jazz saxophonist and clarinetist Wendell Harrison has long been known for taking his music into his own hands, and the release of his newest single — “Turnaround” — is of no minor exception.

“Quite often as humans we have to stop, take count of where we’ve been, and analyze our progress and direction in terms of our future,” Harrison says, taking stock of his extensive career.

Born in 1942 in Detroit — and a student of the Detroit Conservatory of Music (now the College for Creative Studies), Harrison has performed with Marvin Gaye, Aretha Franklin, Sammy Ward, Grant Green, Eddie Jefferson, Sun Ra, Marcus Belgrave, Jimmy Owens, Howard Johnson, Hank Crawford, and then some. He’s well-well-established as a solo artist and his Mama’s Licking Stick Clarinet Ensemble, and co-founder of Rebirth Inc., a music education endeavour.

“In retrospect, I have produced an abundance of jazz products and taught many jazz students in my life time,” he continues, reflecting over his roster of steadfast accomplishments. “However, so often I have to fine tune my goals and objections and sometimes I feel like turning around and starting all over.”

This is something he very recently and tangibly did.

Harrison’s enrolment at Spring Arbor University and obtaining a master’s degree in mass communication “helped me to communicate better with the younger generation and passed on some of my experiences as a jazz musician,” he shares. “My ‘turn around’ is helping young jazz musicians to develop the language of jazz and garner support for their art.

“Also, aiding musicians in reaching their goal as successful artists.

“As a be-bop musician developing complex ideas and compositions, I decided to make a contrast in my direction. I constructed this composition based on a simple melody line played on the tenor saxophone with moving chord changes, however I developed a funky groove that inspired feeling and passion. ‘Turnaround’ is set up on a repeated bass line played by Brian Juarez with Djallo Djakate on drums that projects a hot groove. Also, enforcing the groove is pianist Alexis Lombre and guitarist Jacob Schwandt, who climaxed the tune with an inspiring guitar solo.”

“Turnaround” is available now.
We would like to thank Eric Alper for the artist profile and press release.