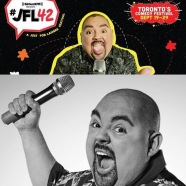 By Nicholas Chan.
Toronto hosted JFL42, presented by SiriusXM, and comedy fans were ecstatic to find they announced even more acts this year. Bridging unparalleled standup performances by some of the best comedians in the world, this year’s festival was a Toronto must-attend event! One of the main headliners, Gabriel Iglesias had a hilarious high-octane show during his visit here in Toronto during Just For Laughs 42.

We had the honour to attend Gabriel Iglesias performance on September 28th 2019. Gabriel Iglesias is one of America’s most successful stand-up comedians with sold out shows, over 9 million fans and over 350 million views on his YouTube Channel. During his performance, he spoke about coming to Canada, having the infamous Poutine, joked about how being a ‘big guy’ he needed his hotels rooms to be really cool, so cool it would be confortable for penguins. He also talked about his partnership with Netflix, his Chihuahuas, and how country music somehow knew how he felt after his split with his wife. He brought up Trevor Noah and laughed at the fact he challenged him to an eating contest.

Iglesias is currently on his new world tour, “One Show Fits All.”, celebrating his 20 years in stand-up comedy. Be sure to catch him on his tour for guaranteed laughs.

We would like to thank Charlene Coy of C2C Communications for the invitation to JFL42. We look forward to the 2020 version of JFL42.