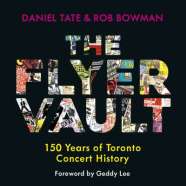 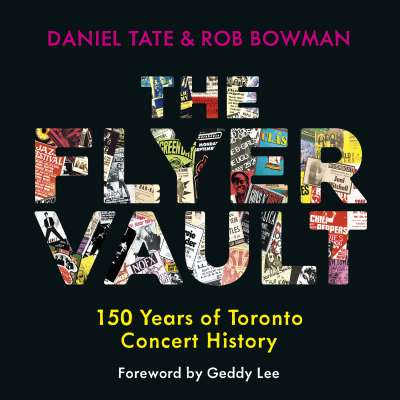 First it was an Instagram must-follow, now it’s a book! From Duke Ellington to David Bowie to Daft Punk, Toronto has played host to many music legends, making its name as a major music destination in both Canada and the world. 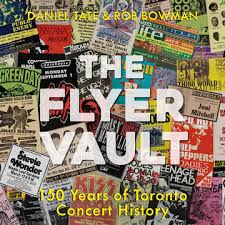 Born from the popular Instagram account of the same name, The Flyer Vault runs the gamut of musical genres — from vaudeville to techno and everything in between — using Tate’s extensive collection of concert posters and flyers to illustrate the breadth of Toronto’s musical history.

Complementing the stunning visuals are stories highlighting iconic moments in legendary music venues across the city, including the Horseshoe Tavern, Massey Hall, The Rock Pile, the Edge, and many more.

As beautiful as it is informative, The Flyer Vault is a visual tour-de-force showcasing Torontos’ vast and venerable concert history.

Daniel Tate worked in the concert industry for several years before starting The Flyer Vault project in 2015. HIs efforts to chronicle Toronto’s live music history have been featured in the Globe and Mail, NOW, Vice, and on blogTO. He resides in Toronto.

Rob Bowman is a GRAMMY Award winner and professor of music at York University who has been writing about music for more than 40 years. His book Soulsville U.S.A.: The Story of Stax Records was inducted into the Blues Hall of Fame in 2013. He lives in Toronto.

“As I delved deeper into music, the only downside was realizing how many legendary music shows I had missed that passed through my city. The Flyer Vault helps bottle the lore, bringing me a little bit closer to my Toronto and its shows that have only grown in renown.” — Danko Jones

“These pages will take you on a musical, magical mystery tour of Toronto’s important place in concert history. Reading The Flyer Vault creates a rush just like the one you get when the house lights go down.” — Dan Kanter, Multi-Platinum Songwriter & Producer

“I’m not sure there’s ever been anything like this… The graphics are fascinating, the script is comprehensive. It’s staggering what’s been unleashed from the Vault.” — Gary Topp, Legendary Concert Promoter & Producer
We would like to thank Eric Alper for the press release and artist profile.