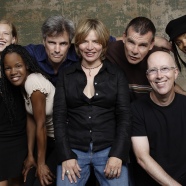 Posted by BK on November 22, 2019 in Music Reviews, Reviews | Leave a comment

Canadian Songwriters Hall of Fame to induct six songs that helped to define the ‘60s, ‘70s and ‘80s, borne from the streets of Toronto with global impact

Toronto, ON (October 22, 2019) — The Canadian Songwriters Hall of Fame (CSHF) today announced the induction of six influential songs from the Toronto music scenes of the 1960s, ‘70s, and ‘80s, that will be celebrated at a special concert taking place on Thursday, Nov. 21, 2019, at Toronto’s Phoenix Concert Theatre.  Songs included are “Rise Up” (Parachute Club), “Let Your Backbone Slide” (Maestro Fresh Wes), “(Make Me Do) Anything You Want” (A Foot in Coldwater), “Calling Occupants of Interplanetary Craft” (Klaatu), “Opportunity” (Mandala), and “I Would Be the One” (Kensington Market). The newest song inductions will be celebrated at an industry and public event,  DECADES: The Toronto Sound of the ‘60s, ‘70s & ‘80s, with tickets available on sale now via Ticket Web.

“We’re very excited to honour some of the amazing songs that were inspired by, and reflect, the unique city of Toronto – from a group of talented songwriters, who bring different perspectives from three distinct decades,” said Vanessa Thomas, Executive Director of the Canadian Songwriters Hall of Fame. “It will be a night filled with nostalgia, fantastic music, and heart. Many thanks to Crowe Soberman and Gowling WLG for their support of the Canadian Songwriters Hall of Fame to produce this inaugural, not-to-be-missed celebration.”

The evening will feature performances by Segato (Parachute Club), and by other surprise guests. The showcase underscores the songwriting prowess of each artist across multiple genres to reflect the diverse communities and sounds of Toronto, from hip hop to psychedelic pop, new wave and soul.

The SOCAN classic Rise Up was one of the first Canadian hit pop recordings to incorporate the mesmerizing rhythms of Caribbean reggae and soca. Under pressure to complete their first album, the seven-member Toronto band The Parachute Club worked along with their artist friend Lynne Fernie to complete the last song for their self-titled debut LP.  The banddebuted the anthemic song Rise Up at the opening of Toronto’s famous world music venue  The Bamboo Club and later at 1983 Toronto Pride event at the University of Toronto to several hundred fans. Although Canada’s Charter of Rights and Freedoms had recently come into being, gay rights were still in their infancy. Segato adds, “The impetus for Rise Up’s success first came from our grassroots gay, lesbian and feminist community, who were the first to hear and awaken to our call for equality.” The advent of Canada’s MTV style video programs such as New Music and Much Music launched their video into high rotation and ensured a long run on the radio and TV. Rise Up was produced by the now-legendary Daniel Lanois. The song became a hit with the album going gold by December 1983, and winning Single of the Year at the 1984 JUNO Awards. The song’s enduring appeal status has solidified its reputation an empowerment anthem for the ages.

About Canadian Songwriters Hall of Fame

The Canadian Songwriters Hall of Fame (CSHF) honours and celebrates Canadian songwriters and those who’vededicated their lives to the legacy of music, and works to educate the public about these achievements. National and non-profit, the CSHF is guided by its own Board of Directors, who comprise both Anglophone and Francophone music creators and publishers, as well as representation from the record industry. In December of 2011, SOCAN (the Society of Composers, Authors and Music Publishers of Canada) acquired the CSHF. The Hall of Fame’s mandate aligns with SOCAN’s objectives as a songwriter and publisher membership-based organization. The CSHF continues to be run as a separate organization. www.cshf.ca

Thanks to Eric Alper for the media release.