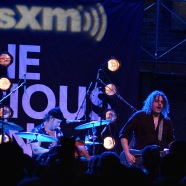 I went back to sleep 8:30 on this Monday morning after the phone rang. I figured BK wouldn’t contact me for an emergency so why bother responding? Good thing he knows me, I absolutely would respond “yes.”

He required confirmation that I could make it to The Concert Hall by 6:30 for a Sirius Radio special appearance of Kingston’s, Glorious Sons. I phoned him after giving my head a shake. Wow! What a fine start to the week this turned out to be. I had a strong sense this would be exceptional. Having seen them on previous occasions, such as Burlington’s Sound of Music Festival, enhanced my anticipation.

Just back from touring Europe, I expected to encounter a well-greased band. They were that all right, delivering a great, tight, hard rocking set. The venue filled mostly with VIP fans had an energy going before Glorious Sons hit the stage. The band felt it, feeding off the crowd by giving us three more songs than on the set list. You had to love it, great live act.

The current music these guys are turning out likewise moves in the right direction, with their latest single, Panic Attack hitting #1. Many of the fans have been attending for years, with good reason. They’re pulling for these guys and are proud to see how the band has developed to this level.

The “War On Everything” tour starts January 16 in Harrisburg, PA at Club XL, with many stops across Canada. One being next February 27 in Toronto at the Scotiabank Arena. https://www.theglorioussons.com/