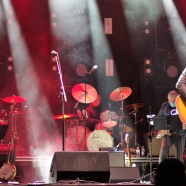 Why would you drive to London’s Western Fairgrounds in the rain on a Sunday night? To watch live music with an actual stage, real lighting, real sound, and real people playing. A historical event. It’s the world’s first live drive-in-awards show!

The “Country Music Association of Ontario” or the “CMAO” awards show. The CMAOntario Awards bring emerging artists to the forefront and celebrate excellence and outstanding professional achievement by Ontario country music artists and songwriters.

This inimitable live event features appearances and performances by Ontario’s brightest talents. Presented by Slaight Music, with support from Ontario Creates, the CMAOntario Awards acknowledge the talent and achievements of Ontario’s country music industry across 17 categories.

Hosted by Jason McCoy, the 8th Annual CMAOntario Awards included a drive-in audience of 225 vehicles to see live performances by Tim Hicks, James Barker Band, The Reklaws, The Abrams, Eric Ethridge and Kalsey Kulyk, Genevieve Fisher, Kelsi Mayne, Les Rats d’Swompe, Nicole Rayy, Ryan Langdon, and The Western Swing Authority. For the grand finale, fellow CMAOntario performers joined McCoy onstage for a special rendition of his song “We Are One World.” The rain held off and people honked to the tune of Sweet Caroline.

It was a great time. Seemed like everyone was having a blast just being able to perform or watch live music.

ALBUM OF THE YEAR sponsored by COUNTRY 106.7
“Wild As Me” – Meghan Patrick

SONGWRITER(S) OF THE YEAR sponsored by SOCAN
Meghan Patrick, Jordan Rager, Michael Whitworth – “Wild As Me”, Recorded by Meghan Patrick

MALE ARTIST OF THE YEAR sponsored by ECAO/IBEW
Tim Hicks

FRANCOPHONE ARTIST OR GROUP OF THE YEAR sponsored by Desjardins

These wins mark a historic run for CMAOntario artists: