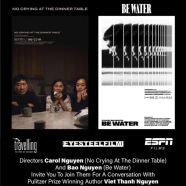 Carol Nguyen is a Vietnamese Canadian filmmaker based in Toronto and Montreal. Her films often explore the subjects of cultural identity, family and memory. Her most recent film “No Crying at the Dinner Table” premiered at the Toronto International Film Festival and had its international premiere at IDFA 2019, where she was also invited as the Opening Night speaker. It also received the Jury Prize for Short Documentary at SXSW. Carol is a 2018 Sundance Ignite fellow, Adobe Creativity Scholar and a TIFF Share Her Journey ambassador, where she strives to empower diverse voices and women through her own stories and personal experiences in the film industry. Today, Carol is working towards developing her first documentary feature as well as an animated short.

About NO CRYING AT THE DINNER TABLE

In this cathartic documentary about things left unsaid, filmmaker Carol Nguyen interviews her own family to craft an emotionally complex and meticulously composed portrait of intergenerational trauma, grief, and secrets.

Bao Nguyen is a LA-based filmmaker whose first short JULIAN won a CINE Golden Eagle Award, the Best Student Documentary Short at the Palm Springs, Special Jury Prize at DOCNYC, and was nominated for an IDA Award. He produced the documentary feature ONCE IN A LULLABY which premiered at the 2012 Tribeca Film Festival, won the Audience Award at the Woodstock Film Festival, and was nominated for a Gotham Independent Film Award. LIVE FROM NEW YORK!, about Saturday Night Live, would be his feature documentary directorial debut. It opened the 2015 Tribeca Film Festival and was broadcast nationally on NBC, preceding the 41st season premiere of SNL. His latest film, BE WATER, a documentary about Bruce Lee premiered in competition at the 2020 Sundance Film Festival and was invited to SXSW, Cannes, Telluride, and Hot Docs. He is an alum of the PBS/WGBH Producers Workshop, Berlinale Talents, and Firelight Media Doc Lab. He earned his BA at NYU and his MFA at the School of Visual Arts.

Rejected by Hollywood, Bruce Lee returned to Hong Kong to complete four films. Charting his struggles in two worlds, Be Water explores questions of identity and representation through rare archive, intimate interviews, and his writings.

Viet Thanh Nguyen is the Pulitzer Prize-winning author of THE SYMPATHIZER and its forthcoming sequel, THE COMMITTED.

We would like to thank DAVID MAGDAEL & ASSOCIATES, INC. for the press release.