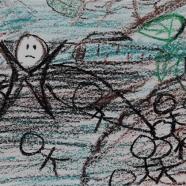 TO CALM THE PIG INSIDE was nominated for the Best Short Documentary Award by the International Documentary Association.

The film premiered at the 2020 Slamdance Film Festival, where it received the Grand Jury Prize for Documentary Shorts(Oscar®-qualifying prize) and went on to collect a series of awards and prestigious accolades including Best Documentary Short at the Hot Springs Documentary Film Festival 2020 and is currently screening in competition at 2020 IDFA.

In Joanna Vasquez Arong’s reflective essay, myths are woven to try to understand how a small town in the Philippines copes with the devastation and trauma of a natural disaster. The documentary film starts with children playing in the aftermaths of Typhoon Yolanda. We see the terrible destruction caused by 7 metre waves, homes destroyed, belongings gone, families homeless. They’ve lost their livelihood, stores, all buildings collapsed. Just piles of debris left. We see people searching for belongings among the debris. Dead bodies waiting to be identified. Residents are left with nothing. In the black and white photographs we see many children and families.  And in the videoclips we see and hear the strength of the typhoon winds and feel the fear they bring.  We see the government news reporting 100 years ago there was a typhoon in the same area killing 15,000. Foreign aid sent doesn’t reach the people it should. These imported donations got into the wrong hands. Devastating to learn. People searching for food – even doctors and business doing this – otherwise they’d starve.

Narrated in a gentle, calm voice in Visayan, the language of the Cebuano people in the southern Philippines. We learn that trauma gets passed on in families. We learn the devastating effects of the typhoon – loss of family members where some lost several children. A moment’s soothing relief is seeing Santa giving gifts to children and an adult joking that she’s a child too. To Calm the Pig Inside is a moving retelling of a life changing typhoon and its effect on an area in the southern Philippines and the resilience of children. Joanna Vasquez Arong has created a wonderful educational and reflective documentary.