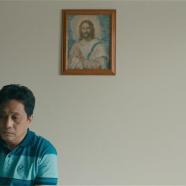 About ISLANDS
Joshua, a timid, middle-aged Filipino immigrant has lived in the comfort of his parents’ home his entire life. He pleads with God to find him a wife for fear of being alone forever.  When his mother suddenly passes he quits his job to look after his father full-time. Inexperienced at taking care of anyone, including himself, Joshua struggles with his father’s care. Help arrives when a cousin visits from abroad whose warmth and nurturing breathes new life into the home and stirs confused emotions in him. ISLANDS playfully explores the Filipino diaspora experience in an offbeat story of filial duty and adult puppy love.

About Martin Edralin
Martin Edralin is a Toronto-based filmmaker. His first short film, HOLE, won the Grand Prize at Clermont-Ferrand, jury prizes at Locarno and the Seattle IFF, a Canadian Screen Award, and screened at Sundance, TIFF, and BFI London. His second short, EMMA, was selected in TIFF Canada’s Top Ten and won Best Live Action Short at the Rhode Island IFF. ISLANDS is his first feature.

We would like to thank David Magdael and Associates for the press release.