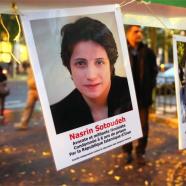 “Nasrin Sotoudeh should win the Nobel Peace Prize.
She is a hero of our time, bravelychallenging misogyny and dictatorship.”
– Nicholas Kristof, The New YorkTimes

Monday, March 8, 2021 – New York, NY   March 8, 2021 is International Women’s Day, and it also marks the 1000th day that Iranian Human Rights lawyer/activist Nasrin Sotoudeh has  been in prison sinceshe was arrested in 2018. Secretlyfilmed in Iran, the documentaryNASRIN is an immersive profile ofone of the world’s most courageoushuman rights activists, and a leading figure in Iran’s remarkably resilient women’s rights movement. It is narrated by Academy Award-winning actress Olivia Colman, and it features an original song (inspired by Nasrin’s prison letters to her children)performed by 4-time Grammy Award-winning singer Angélique Kidjo.

This special conversation includes an introduction by Emmy and Tony-winning actress Christine Baranski, and it will be moderated by NPR News Middle East correspondent Deborah Amos. Amnesty International USA Iran Country Specialist Elise Auerbach will present a call to action, followed by a discussion with: Barbara Slavin, Director of the Future of Iran Initiative at the Atlantic Council; Akila Radhakrishnan, President of the Global Justice Center; Marcia S.Ross, producer of the documentary NASRIN, Jeff Kaufman, director, producer, writer of the documentary NASRIN;  Jafar Panahi – acclaimed Iranian filmmaker who has repeatedly defied an official ban from makingfilms; and Reza Khandan, humanrights activist and Nasrin’s husband.

“NASRIN is a profile in courage for the 21st Century. Sotoudeh is her country’s Nelson Mandela. Nothing seems to deter her. This riveting film shines a light on one of the most enlightened, exciting and courageouspeople in the fight for human rights.” –NEWSWEEK

“This beautiful and essential film shows Nasrin’s incredible strength in the face of terrible adversity in aninspiring and surprisingly personalway. I urge you to see NASRIN!” –Margaret Atwood
For information about Nasrin Sotoudehand the film: