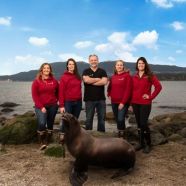 ….is a new 3 x 60 minute TV documentary series filmed in Vancouver and on British Columbia’s beautiful Pacific Coast. The series is directed by Mike Sheehan, produced by Andrew Munger & is a production of Peter Raymont’s White Pine Pictures in Toronto.

Episodes 2 and 3 of Wild Pacific Rescue will premiere in the same Wednesday night time slot on April 21 and April 28, respectively.

Wild Pacific Rescue is a dramatic and emotional wildlife series that takes viewers on an exciting adventure into the wild, mountain-ringed seas of the Pacific Northwest, and behind the scenes at the world-class Ocean Wise Marine Mammal Rescue Centre in Vancouver. We are embedded with world-renowned marine veterinarian, Martin (“Dr. Marty”) Haulena and his team of young, dedicated animal care specialists as they rescue, rehabilitate, and release some of the most fascinating animals on the planet. Their motto: “Every animal counts.”

“Dr. Marty” leads this highly skilled and fiercely loyal team of veterinarians and vet technologists whose mission is to head out into the wild to find and treat some of the most extraordinary and vulnerable creatures in the sea:  sick, injured or distressed marine mammals and other aquatic species – everything from pint-sized sea otter pups to 1500 pound sea lions, and everything in between. Their motto? “Every animal counts.” Dr. Marty’s team is like a family, bound together by their shared responsibility for the rescue and rehabilitation of wild animals and for the ongoing care of thousands of creatures living at the Vancouver Aquarium, where viewers will meet such sea mammals as Buster, Sitka, Blue, Joey and Boomer.

The stakes are high and the risks are real. Treating an injured, angry, 700-pound California sea lion while straddling slippery, wind-swept rocks; hanging out of a Zodiac on the frigid, choppy Pacific Ocean to prevent an animal from choking on a human-made hazard (unfortunately, an extremely common, and deadly, problem!); rescuing orphaned sea otter pups separated from their mothers; and performing delicate eye surgery that will determine an animal’s survival when it is returned to the wild. These are some of the everyday challenges the Marine Mammal Rescue Centre team faces. The patients are wild and unpredictable; the weather and seas are constantly changing. The team’s work is challenging, often dangerous, but always rewarding.

Saving animals and keeping them wild – that’s the mission of “Dr. Marty” and his dedicated team at the Ocean Wise Marine Mammal Rescue Centre in Vancouver, British Columbia.

The series is must-see television for anyone interested in animals and marine wildlife, ocean life, ecology, the environment, marine pollution, and conservation. Or just anyone who enjoys great stories – exciting real-life drama involving wild animals and the dedicated group of people working to save their lives.

Among White Pine Pictures many productions is Arctic Secrets (8 x 60min), a unique journey of discovery to some of the most isolated corners of the Canadian Arctic. The series was produced in association with Blue Ant Media’s Love Nature and the Smithsonian Channel. Other White Pine Pictures productions include the TIFF 2019 Opening Night Gala, Once Were Brothers: Robbie Robertson and The Band, as well as the award-winning documentary feature Margaret Atwood: A Word after a Word after a Word is Power, now streaming on CBC GEM and Hulu. Other acclaimed documentaries made by White Pine include Toxic Beauty and Shake Hands With The Devil: The Journey of Romeo Dallaire, as well as the widely-broadcast TV drama series The Border and Cracked.

We would like to thank Jeremy Katz Publicity, White Pine Pictures for the press release.