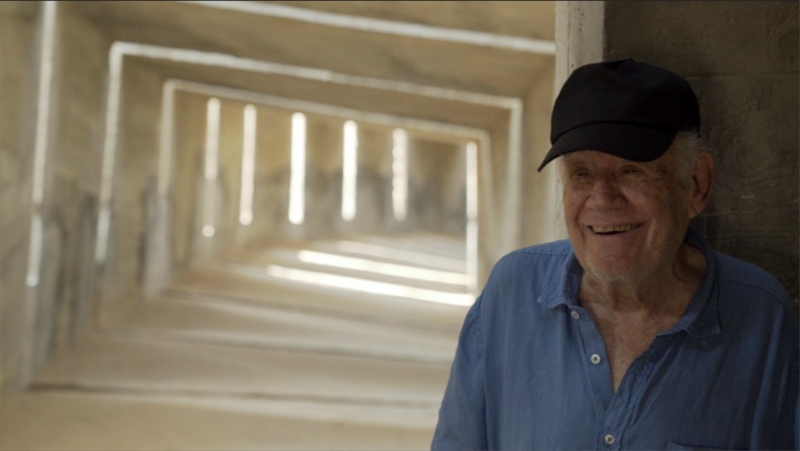 Trailer
As he approaches 90, Dani Karavan embarks on an emotional, political journey. En route, the complex and fascinating character of one of the greatest artists of our time is revealed.
Israeli artist Dani Karavan has created nearly 100 environmental installations all across the world. He has won some of the most prestigious international art awards and is constantly asked to speak or lecture about his groundbreaking work.
Yet Karavan is far from satisfied. His monumental structures are rapidly deteriorating. His advanced age is starting to catch up with him. The political climate in his country is driving him mad, as does the director of the documentary being made about him, whose questions betray his infuriating artistic ignorance. In addition, Karavan becomes embroiled in a serious political and artistic conflict over his latest commission, a monument to Polish nationals who had risked their lives saving Jews during World War Two.  High Maintenance is a cinematic reflection of its namesake. It is a straightforward, yet intricate film, emotional and personal without being melodramatic, and as painful as it is humorous and passionate.
“Dani Karavan has the power to thrill, and even mesmerize, anyone who crosses his path,” says director/producer Barak Heymann. “Yet despite his vitality, success, and fame – this is an artist who has won nearly every possible culture or art award anywhere – he is bursting with anger and frustration over uncountable wrongs.
“It was the tension between Dani’s advance age and somewhat-childish attitude towards any and all criticism directed at him that fired my curiosity,” continues Heymann. “Dani’s irresistible persona was what made me start work on this film, and as filming progressed I began falling in love with Dani Karavan the artist, and with his landmark installations erected across the world. This gradual process I had gone through will, hopefully, be shared by my viewers, as will my great love for this singular man who makes singular art.” High Maintenance has been acquired by Blue Ice Docs for distribution in Canada.  About Blue Ice Docs
Founded in 2014 in partnership between Robin Smith, president of KinoSmith, and Blue Ice Group co-owner Neil Tabatznik, Blue Ice Docs uses the expertise and skills of both organizations to acquire, fund and develop a wide variety of non-fiction projects from around the world. Current releases include: THE REASON I JUMP, iHUMAN, FIRST WE EAT, RONNIE’S, SOROS and THE CHANGIN’ TIMES OF IKE WHITE.
New for Blue Ice Docs is D.O.C. (documentary online cinema) an online streaming service to offer award-winning documentaries not available on any other platform or media in Canada.  Visit https://blueicedocs.com/ for more information.