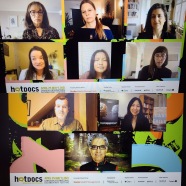 There are more than 219 documentaries over 10 days at the Hot Docs Film Festival on Hot Docs Home streaming platform. This is the 2nd year for the HDFF to be streamed online due to COVID-19. The biggest documentary film festival in North America started Thursday, April 28 with a livestreamed Q & A featuring the director of the Opening film A.rtificial I.mmortality. Director Ann Shin was joined in conversation by Avatar Deepak Chopra and then the real Deepak Chopra!   A.rtificial I.mmortality film deals with the merging of humans and machines. The viewer wonders if computers could let us live forever, would we want that? Self-help guru Deepak Chopra envisions virtual clones that don’t need a body to survive and minds and memories can be digitized.

Here’s the lowdown of documentaries BKontheScene has screened so far…

WeWork: Or the Making and Breaking of a $47 Billion Unicorn The story of  WeWork Founder Adam Neumann – the creator of the first physical social network with the slogan “Do What You Love”. Through interviews with former employees we learn the dynamics of the business. Seeing the 3-day annual ‘summer adult camp’ for employees gives a glimpse at working at WeWork – almost a cult-like atmosphere. Where does the ‘We’ come from in WeWork? It’s the opposite of  ‘I” in iPhone, iPad…

My Mohamed is Different directed by Ines Marzouk deals with older European women who travel to live in Luxor, Egypt for the sun….and for the younger local men who need money and security. An interesting view on life with scenery of daily life in Egypt.

Neighbouring the Moon directed by Reza Farahmand takes place in an Aleppo hospital in Syria where two teenage girls live with their doctor mother since their father was killed in the war. We see life in the hospital during the Covid-19 pandemic and the relationship of the mother and her children. A fascinating documentary.

Vicenta – an Argentinian film directed by Dario Doria is narrated in Spanish with clay figurines. When Vicenta discovers her young, disabled daughter is pregnant as a result of rape, she wages the battle of her life against Argentina’s restrictive abortion laws. Powerful.

Bangla Surf Girls directed by Elizabeth D. Costa follows three rebellious teenage girls in Bangladesh who instead of working and dealing with family pressures seek a  sense of freedom and competition in surfing the waves. Reflective.

Saturday, May 1 at 7PM was a livestreamed panel discussion entitled Persisters: Women Speaking and Being Heard  a conversation with remarkable female filmmakers from this year’s festival and Oxfam Canada Featuring Lauren Ravon (Oxfam Canada), Lalita Krishna (Bangla Surf Girls/In Sync Media), Karoli Bautista Pizarro and EB Landesberg (Only the Ocean Between Us), and Chloe Fairweather (Dying to Divorce), hosted by Heather Haynes (Hot Docs). Presented by Oxfam Canada.
So much more to come this week until May 9 at the Hot Docs festival including Fanny: The Right to Rock  – Bobbi Jo Hart’s rockumentary about the first all-female band to land a record deal and tour the world. David Bowie was a fan! Doc deals with racism and sexism experienced by Filipina-American band members. The history of BIPOC musicians in mainstream rock is a fascinating topic by director Catherine Bainbridge. The band Fanny is giving a Free, live concert streaming, presented by Hot Docs on Wednesday, May 5 at 5PM ET.

← Collision North America’s Fastest Growing Tech Conference New Cadence Productions (NCP) announce the re-boot of hit series “The Brothers Garcia” with “The Garcias,” featuring the entire original cast who are all grown up with diverse families of their own.   →