Home » Arts » FANNY: The Right to Rock  directed by Bobbi Jo Hart is the story of female rock musicians exposed to racism and sexism 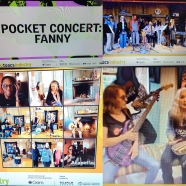 FANNY: The Right to Rock  directed by Bobbi Jo Hart is the story of female rock musicians exposed to racism and sexism

FANNY:  Live concert |Part of Hot Docs 2021 Film FestivalAdding to all the awesome documentary films in the biggest and best documentary film festival HOT DOCS 2021 in the world are live virtual talks and virtual concerts.

The documentary FANNY: The Right to Rock  directed by Bobbi Jo Hart is the story of female rock musicians exposed to racism and sexism… and now the ageism in the music industry history. The first female rock group in the USA consisted of Filipina Americans. This wasn’t just any band…fans included David Bowie and Todd Rundgren. The film is inspiring and is a must-see for rock music fans and music fans alike. Hot Docs offered a free virtual concert of  FANNY with band members on \May 5.  Live from three different locations the band members  June, Jean and Brie participated in a Q and A.  FANNY was one of the important bands of the time. And the only female band.

Trailblazers for women in rock music.  In the Hot Docs concert Fanny sang a selection of songs with the final song taking Fanny back to their first band. Civil Rights movement time.  Ten young women from their Band Camp performed this song. Awesome. What are their words of wisdom?  Believe in yourself.  They sure did. And their belief made Fanny a success. Enjoy their new album “Fanny Walked the Earth” and look up Fanny’s past music. That’s after watching their documentary at Hot Docs 2021 FANNY: The Right to Rock !  Enjoy!

← Opera Atelier Presents Handel’s Visionary Masterpiece — The Resurrection — Emmy-Nominated Director Michèle Stephenson Returns to the 2021 Edition of the Tribeca Film Festival With Her Latest Documentary, STATELESS, Which Will Have Its National Broadcast Premiere on POV on July 19 →