Alchemical Cinema: Land Breath Fire. Sound by Allison Cameron, in a controlled burn of the forest in High Park.

Posted by BK on May 31, 2021 in Arts, documentary, Events, film, Music, premiere, Showcase | Leave a comment

Alchemical Cinema: Land Breath Fire. Sound by Allison Cameron, in a controlled burn of the forest in High Park.Composer Spotlight: Allison Cameron. Allison Cameron is a professional composer, performer and improvising musician in Toronto. Her reputation for writing compelling compositions for contemporary music ensembles is international. Her improvising trio c_RL (pronounced curl) was a featured performer at the international conference After Experimental Music in Ithaca, NY and most recently was part of the festival Goteberg Art Sounds in Sweden. In 2018 she won the KM Hunter Award in music, and, her improvised and composed work was featured in a two-day mini-festival by Toronto’s Arraymusic.

Allison will have two works on our upcoming production of Quiet Time: her audio-visual piece Sea Tomatoes and a newly commissioned work that she’ll be performing in on banjo, ukulele, and tapes alongside Robin Dann (voice) and Matthew Pencer (electronics).“For Quiet Time, I re-visited field recordings and videos from my 2013 Arctic residency around the island of Spitzbergen in Svalbard. I had never seen such beauty and fragility, nor experienced sound and light so differently than during this Arctic expedition. I want to evoke some of this experience by combining my Arctic field recordings and videos with new vocal and instrumental colours to create an interesting ‘interior’: a subconscious, dreamyaudio-visual soundscape. 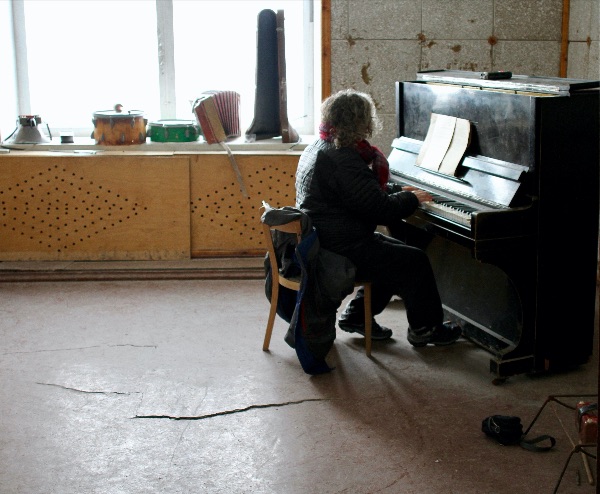 Allison Cameron at a music room in a small educational building in the abandoned mining town of Pyramiden (78°N). Photo by Hannah Michaela.