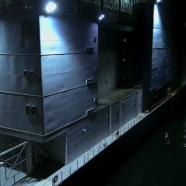 Deathtrap on the East River (image from ongoing investigation by Laura Poitras and Sean Vegezzi)
Laura Poitras and Sean Vegezzi release video footage documenting a public health emergency and COVID-19 conditions on a prison ship on the East River in the South Bronx. The video documents the use of chemical agents, so-called “enhanced restraints,” protests, and COVID-19 quarantines on-board. On May 7, 2021 Take Back the Bronx organized a protest to deliver PPE to detainees on the ship. At the protest one of the detainees called from inside the ship to describe the conditions on-board:”I’m here on The Boat in unit 2AD and we are trying our best to get the attention of Mayor DeBlasio and [DOC] Commissioner Cynthia Brann with regards to the lack of social distancing. We are still quarantined as a result of them bringing in people who were infected. These people made it very clear to this administration that they had not been tested and they were still allowed to come into this unit.” said William Lee Clanton who is incarcerated at VCBC.“This situation is unconscionable. DeBlasio and Cuomo should be ashamed of themselves that they’ve kept this prison ship open 15 months into the pandemic. As these recordings show, there is a crisis situation on-board and the prison ship should be shut down immediately. This footage is part of a larger project, but given the urgency we are releasing these recordings now,” said filmmakers Laura Poitras and Sean Vegezzi. At least three people incarcerated on VCBC (the Vernon C. Bain Correctional Center) have died of COVID-19 since the start of the pandemic. VCBC reported its first cases of COVID-19 on March 18, 2020 when a corrections officer and inmate tested positive. Fifteen months into the pandemic, VCBC is still consistently well over the Board of Correction’s recommended capacity limit, and inmates are subjected to the almost daily use of chemical agents and enhanced restraints – including leg shackles, and having arms, legs and chest locked to a gurney. “The Boat is a death trap where our community and loved ones are being held captive. Release them!” says radical grassroots collective Take Back the Bronx member Shawn Hudson.
VCBC is an intake processing jail anchored off of Hunts Point in the East River. The majority of people on the ship are awaiting trial. Commissioned in 1989 and custom-built in Louisiana to NYC’s specifications, VCBC arrived NYC in 1992. In the mid-90s VCBC was temporarily closed, then converted to a juvenile jail, and then converted back to an adult jail notorious for abuses and violence against detainees. Mayor De Blasio privately committed in 2018 to closing down VCBC

ABOUT THE FILMMAKERS:Laura Poitras and Sean Vegezzi are filmmakers in New York City who document and investigate state power.www.praxisfilms.org || www.seanvegezzi.com
We would like to thank :Layla Hancock-Piper of Cinetic Media for the press release.