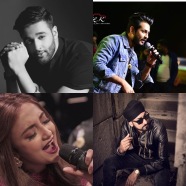 Digital festival to feature Bollywood, Punjabi and Multicultural performances, Online Talent Hunt, and a Classical The Arts and Culture Initiative of South Asia (ACISA) will be presenting one of the largest South Asian festivals in Canada – VIBRANT BRAMPTON – that will showcase the culture and diversity of Ontario from July 23 to 25, 2021.

As in the past, the 2021 digital festival will present international and local artists from across the globe. It will be streamed live over festival Facebook page @Vibrantbrampton

“This year’s festival will showcase over 250 local and international artists from Canada, USA, UK, Pakistan and India with over 50 acts over the course of the three components of the festival,” says Arpan Banerjee, ACISA co-founder.

Among the headliners is Bollywood playback singer Monali Thakur, winner of the famed Filmfare award for her song “Sawaar Loon“, who then also received the prestigious National Film Awards for her song ” Moh Moh Ke Dhaage” from the film “Dum Laga Ke Haisha“.  With over 140 numbers to her credit, mainly in Hindi and Bengali, Thakur has also been one of the judges for the famous singing talent show, SA RE GA MA PA  L’il Champs

“As Plato has stated, music is a moral law. It gives soul to the universe, wings to the mind, flight to the imagination, and charm and gaiety to life,” reiterates Ricky Bajaj, Festival co-founder.   “Our festival brings an array of arts and culture that have the power to enrich the spirit and connect humanity,” says Bajaj.

The 2021 digital festival curtain raiser began with the 2nd annual edition of VSTAR, an online talent hunt of local emerging artists that began on June 21 and will conclude on July 20.  The top three contestants will get the opportunity to perform at the Vibrant Brampton in-ground festival in 2022.

“Over 100 entries were received for VSTAR 2021 and top 46 were selected for the first round, coming down to top 6 finalists who will be performing on July 25,” adds Ricky Bajaj. “Last year’s finalists of VSTAR will be performing at this year’s VIBRANT BRAMPTON Festival, streamed live over 3 days from 6 pm onwards on July 23, 24 and July 25.

Like last year, this year’s festival will end in a somber note with a classical music and dance component, VIBRANT CLASSICAL, which stemmed out of the need and demand for a platform for local Classical Music & Dance artistes to showcase their art forms in GTA. This part of the festival will be streamed live on August 7 and 8.

The festival is sponsored by TD Bank and supported by Lazeez Shawarma and Downtown Brampton BIA along with the generous support of the City of Brampton, Canadian Heritage and Canada Council for the Arts.

“At TD, we know that music connects communities and allows us to find common ground, discover new perspectives, and work towards a more inclusive future,” said Anna Iacobelli, Senior Vice President, Branch Banking, TD Bank Group. “That’s why, we are so proud to celebrate Canadian music and to support Vibrant Brampton in helping amplify diverse voices in arts and culture and support artists that have been adversely affected by the COVID-19 pandemic.”

Bollywood Playback Singer Monali Thakur, winner of the famed Filmfare awards for her song “Sawaar Loon“, who then also received the prestigious National Film Awards for her song ” Moh Moh Ke Dhaage” from the film “Dum Laga Ke Haisha“.  Her song from the film Race, “Zara Zara Touch Me” filmed on the glamorous Katrina Kaif was one of the most popular number sof 2008.  She has over 140 numbers to her credit, mainly in Hindi and Bengali. She has also been one of the judges for the famous singing talent show, SA RE GA MA PA  L’il Champs

Manj Musik AKA Manjeet Ral from UK–  Highly acclaimed Punjabi Singer who has worked with several Bollywood Stars including Akshay Kumar, Shahrukh Khan, Salman Khan, Abhiskek Bachchan, Saif Ali Khan and Tiger Shroff.  He has also collaborated with leading artists like Snoop Dog, LMFAO- Red Foo, Sean Kingston, Fat Joe, Ludacris and T-Pain. Manj is the only South Asian artist in the world to do most number of collaborations with USA based mainstream Western Artists.

Avkash Mann:  Son of famous Punjabi actor, singer and music composer from BC, Canada Harbhajan Mann, Avkash’s debut single “Away” received millions of streams across YouTube & placements in over 250 playlists on Spotify, including the prestigious American Top 40 hits. This was followed up by Avkash’s debut Punjabi single “Tere Vaaste” . Avkash’s next English single “Dreams”, produced by Riley Urick (who has produced tracks for artists such as Tyga, Kanye West & Chris Brown) was featured across multiple American and Canadian radio, television channels & online media, gaining streams in the millions. Avkash has followed these releases up with more successful Punjabi singles, namely Jatt Di Star, Aina Sohna (The Kali) and With You-Tere Naal, showcasing exploration in new genres and garnering new milestones in his career.  Avkash has built his brand as a unique and novel artist, catering to the core Punjabi & Western audience simultaneously.

Arts & Culture Initiative of South Asia (ACISA) is a non- profit organization with a vision to promote cross cultural understanding with the aim to bringing a diverse community together in celebration of life, culture, art and tradition.

The organization’s mission is to promote the diversity of South Asian art forms by showcasing local artists and providing them with an opportunity to present their work to a wide audience;  break cultural barriers and encourage participation, allowing all communities from Brampton to experience the different forms of South Asian Arts and culture; showcase South Asian heritage as it continues to evolve imbibing the cultural values of Canada and communicate key messages that share the philosophy of diversity with residents of Brampton.  For more information, visit www.acisa.ca /

VibrantBrampton – A heritage festival featuring performances from renowned and emerging artists that showcases the culture and diversity of Ontario from July 23 to 25, 2021.

VibrantStar– A talent hunt with six finalists battling to win the top prize in three categories- vocal, instrumental and dance. The event will provide an opportunity for artists to perform in Brampton’s largest arts, culture and heritage festival, #VibrantBrampton. Online auditions began every Monday and Tuesday from 7 – 8 pm from June 21 until July 20.    The top three contestants will get the opportunity to perform at the Vibrant Brampton in-ground festival in 2022.

VibrantClassical– A new segment launched last year to provide a platform for classical artists to showcase their art forms. This segment will be streamed live on August 7 & 8

Visual Arts of South Asia (V.A.S.A) festival– An arts festival that provides artists with the opportunity to connect and create and promotes the visual arts through educational workshops and performances.

META- A digital and modern art festival that will live-stream exciting content over select dates in August focussing on both workshops/panels featuring local creators and partners, as well as live-streamed performances from global and local artists. The festival will feature artists from Brampton and Mississauga.

We would like to thank Renu Mehta-Imagebuilderz for the press release and artist profile.