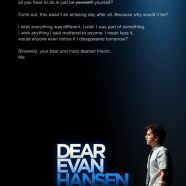 The acclaimed Dear Evan Hansen, from stage production to the big screen, is a story of adolescence and awkwardness. High school student Evan Hansen struggles with his problems of social anxiety and with the guidance of his psychiatrist, tries something different to deal with his life by writing letters to himself about what is positive in his life.
The psychiatrist reinforcing these positive things, sparks the start of misadventures, where in trying to make his life acceptable, Evan concocts imaginary people, a life of imagination and scrambling, to hide from the real world.

Julianne Moore, Kaitlyn Dever, Amy Adams, Amandla Stenberg, with Ben Platt and Colton Ryan, star in this adaptation of Steven Levenson’s multiple Tony Award winning musical. Evan and Colton reprise their roles from the big stage production, and time will tell if the Academy Awards will be just as generous for Dear Evan Hansen.

← Vengeance is Mine, All Others Pay Cash!@TIFF 2021 ! Landing as a Striking Statement of Acceptance, Chamber Pop Artist Jack In Water Reveals Emotionally Charged LP →