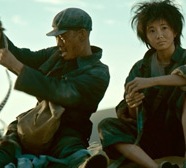 Toronto International Film Festival 2021TIFF21 Closing Film ONE SECOND     by  Sally Warburton
We can’t believe TIFF21 is over!!  The last day for TIFF21 was Saturday, September 18. TIFF’s Joana Vicente introduced the film and greeted the audience sharing the joy of having a successful TIFF21. The last film was Zhang Yimou’s “One Second”.  The film takes place in China in a remote desert town surrounded by desert. The scenes of this big desert of sand dunes start the film, end the film and are where chase and other major scenes take place. The desert is where the ‘one second’ clip from the reel of film is lost… and never found. What is the ‘one second’ clip? The main character, the nameless fugitive, who’s escaped from prison, is in search of a film clip of his daughter. The daughter he last saw when she was 8 years old and is now aged 14. The film takes place in the town’s cinema with a huge crowded room of people fascinated and fully focused on the film. Lu Haocun plays the young teenage girl who steals the film. The fugitive meets her and gets it back. We see where the girl lives alone with her very young brother ever since their parents have died. One particular scene with the little boy is priceless, this little actor shows such extreme fear when the fugitive arrives. The film projectionist, Mr. Movie, played by actor Fan Wei, does an about face – turning from aggressive to docile – after another violent episode with the fugitive. The fugitive wants to see the film clip of his daughter over and over again. Mr Movie creatively designs a loop of the film clip of the fugitive’s daughter that can be continuously seen…all night.

The final film was screened at the VISA Screening Room at the Princess of Wales theatre. The venue is beautiful. Perfect for seeing a film on a huge screen which is clearly visible from every seat. Excellent sound. TIFF21 tickets purchased were assigned seats so no need to line up ahead of time. Assigned seats were for all films at TIFF21 – the TIFF Bell Lightbox, Roy Thomson Hall, Princess of Wales and Cinesphere at Ontario Place. This allowed for lots of social distancing ensuring people were sitting apart unless a known group. Masks were required to be worn inside. Proof of double vaccination for COVID-19 required and checked at entry.
This year the TIFF21 team planned very creatively to offer a variety of film screening venues allowing for personal distancing due to the COVID-19 pandemic.  Venues included TIFF Bell Lightbox cinemas, Princess of Wales theatre, Roy Thomson Hall, Ontario Place Cinesphere, Drive-Ins and an outdoor film screening venue. What an excellent job they did! Another successful, modified version due to Covid-19, TIFF Toronto International Film Festival 2021.  Looking forward to TIFF22 !