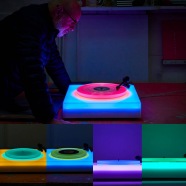 We don’t want to argue semantics. But there’s no better way to enjoy your favorite album, song, or band than on vinyl played on whatever turntable that fits your budget. While all of the turntables we’ve previously covered check all the boxes for value and performance, none of them deliver quite like this limited edition color-changing turntable from the one and only Brian Eno.

Yes, we’re talking about the same celebrated musician, composer, producer, artist and multi-hyphenate with an oeuvre that would make anyone but DaVinci blush. His latest work is the acrylic turntable you see here with integrated LEDs that illuminate the entire base and platter in a range of colors that can be calibrated to change as the music plays. The limited-edition run includes just 50 turntables available through the Paul Stopler at an as-of-yet undisclosed price. But given the pedigree, associated acts, and build quality, we expect it costs a pretty penny.

About Brian Eno: Alongside his solo work, Eno collaborated frequently with other musicians in the 1970s, including; Roxy Music, Robert Fripp, Harmonia, Cluster, Harold Budd, David Bowie, and David Byrne. He also established himself as a sought-after producer, working on albums by John Cale, Jon Hassell, Laraaji, Talking Heads, Ultravox, and Devo, as well as the no wave compilation No New York (1978). In subsequent decades, Eno continued to record solo albums and produce for other artists, most prominently U2 and Coldplay, alongside work with artists such as Daniel Lanois, Laurie Anderson, Grace Jones, Slowdive, Karl Hyde, James, Kevin Shields, and Damon Albarn.