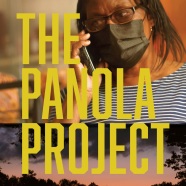 The film was released with The New Yorker, featured on MSNBC’s The Last Word with Lawrence O’Donnell and Morning Joe and written about in numerous publications, including People, USA Today, The Los Angeles Times, and Business Insider. THE PANOLA PROJECT received Audience Awards at GlobeDocs and Sidewalk Film Festival, where Dorothy received the Spirit of Sidewalk Award.WHO:As a Black woman with a complex family history related to race, Rachael DeCruz’s work centers on how race impacts people’s ability to navigate systems. She’s currently working on her debut feature, NINE, which was an official selection of the 2021 Big Sky Pitch and received a development grant from the Ford Foundation. DeCruz is the Associate Director of Advocacy at the Center for Antiracist Research, founded by Dr. Ibram X. Kendi. Her work as a writer and opinionist has been published in outlets like the Huffington Post and The Seattle Times. Prior to joining the Center, DeCruz served as Chief of Staff at Race Forward and on the Executive Committee of Seattle’s King County NAACP for over five years.Jeremy S. Levine is an award-winning filmmaker and assistant professor at Suffolk University (previously at the University of Alabama). His films explore race, class, and trauma, and seek to unearth buried tragedies in a society in active denial of its own past. An Emmy award-winning filmmaker and two-time Sundance Institute fellow, his work has screened at over one hundred film festivals around the world, including the Berlinale, Tribeca, and Sundance, streamed on Netflix, Amazon Prime, Sundance Now, and Hulu, broadcasted nationally in nine countries, and received over a dozen festival awards. His last feature, FOR AHKEEM, named in Top 10 lists by both Entertainment Weekly and People, is a love story set against the backdrop of the Ferguson uprising and the school-to-prison pipeline. Levine launched the production company Transient Pictures with Landon Von Soest and co-founded the Brooklyn Filmmakers Collective (BFC) in 2006.WHEN:On-demand from 8:00AM MST, Thursday, January 20th to 10:59PM MST Saturday, January 30th, 2022.WHERE:Online: https://festival.sundance.org/program/#film-info/61ae1bae14aef725891c43baTickets: https://festival.sundance.org/tickets/#
The Explorer Pass ($50) gives all-access to several digital festival programs including shorts.

← THE FABULOUS FILIPINO BROTHERS-AVAILABLE ON ALL DIGITAL PLATFORMS ON FEBRUARY 8 ! Poly Styrene: I am a Cliché – Release Date- February 4th, 2022 →