Home » Arts » LA LISTE: EVERYTHING OR NOTHING 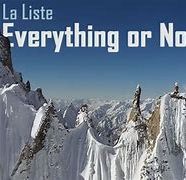 LA LISTE: EVERYTHING OR NOTHING

ABOUT LA LISTE: EVERYTHING OR NOTHING Big mountain skiers, and close friends, Jérémie Heitz and Sam Anthamatten, find beauty and display grace in the dangerous world of free-skiing. Follow them as they set off around the world to find the most awe-dropping, high-altitude peaks and mountain ranges that exceed 6000 metres, and do what they do best: ski. ABOUT JÉRÉMIE & SAM Jérémie HeitzKnown amongst his peers as “the fastest freeskier in the world”, Jérémie caught the attention of the global ski audience while competing on The Freeride World Tour.

He placed second place overall in 2014 and ninth overall in 2016, but ultimately walked away from competitive skiing to pursue his own personal goals in the mountains.  In 2016, he ticked off a list of the Alp’s most iconic ski descents, skiing them in a “freeride style” that saw him arc massive turns at speeds over 100kph on lines that, historically, call for hundreds of calculated jump turns. Born in Switzerland’s Les Marecottes in 1989, Jérémie brings his dry, Swiss-French sense of humour with him wherever he goes. Sam AnthamattenSam Anthamatten resides comfortably at the crossroads between freeriding and alpinism. After a successful career in competitive ice climbing, he became a certified UIAGM mountain guide at the age of 23. He’s preternaturally conditioned to high altitude mountaineering. And he’s one of the few humans on the planet who can keep up to Jérémie on the way down. Residing in the mountain mecca of Zermatt, Switzerland, Sam’s at the forefront of a mountain community that continually pushes the limits of skiing, alpinism and everything in between. ABOUT THE FILMMAKERS Eric Crosland – DirectorCrosland is one of the principal founders of Sherpas Cinema. For the last 20 years, he’s been filming and directing action sports films that have redefined the genre with intricate storytelling, hard-hitting visuals, genuine character development and creative sound design.  As one of the creative forces behind All.I.Can (2010), Into The Mind (2013), TSIRKU (2016), Loved By All (2018) and countless other films, he’s developed a directorial style all his own, one that conveys the soulful core of his subjects. Sherpas CinemaSherpas Cinema is a boutique full-service production house based in Western Canada that specializes in adventure storytelling. Known for pushing the limits of filmmaking, Sherpas Cinema films have been heralded as the best of their kind,
touring the globe and winning multiple awards along the way.
We would like to thank Jessie Yoo from Maxine Leonard PR for the press release.