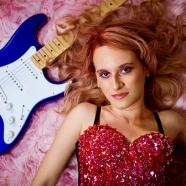 Watch “A Momma To Cry To (Official)” via YouTube Here

The search for contentment and personal freedom is often a lifelong journey that can take us to many different places along the way. Blues/Rock “Woman of the World” Caroline Cotto has lived that journey and shows us the map with her smoldering new single “A Momma To Cry To” — available now!

The drive to find herself and develop her artistry led the New Orleans-based guitarist/vocalist and songwriter from New York to Paris to London and finally, to NOLA to signal her arrival as an artist and woman who has discovered through all her travels that she’s always carried everything she needs within herself.

“‘A Momma To Cry To’ describes a young woman on the journey to her spiritual awakening,” says Cotto. “The song’s message is about forging your own path and moving forward despite one’s past.”

Laden with feverish longing, “A Momma To Cry To” is a slow-burn ballad in 6/8 time featuring Cotto’s soulful, at times mournful, vocals over tremolo guitar arpeggios, a rich rhythm section and a few sonic surprises and nods to Cotto’s diverse influences.

“It started off as a country song,” she notes. “Then, it developed into a beautiful, atmospheric world reminiscent of Pink Floyd’s album, ‘The Dark Side of the Moon,’ with touches of glockenspiel à la Bruce Springsteen’s ‘Born to Run.’”

Those intriguing touches she includes in her blues has helped Cotto’s music to be featured on high profile radio shows such as  “Little Steven’s Underground Garage” and Genya Ravan’s “Goldie’s Garage”.

Forging her own path is something Cotto has done all her life. A lover of literature and poetry from a very early age, she became a published poet before she was 12-years-old. Then, words were not enough and Cotto looked for a vehicle for them in music. She started learning guitar and became obsessed with it, performing at local open mics. She then went on to study at Connecticut College and New York University, performing in East Village clubs like the famous Sidewalk Café.

Cotto still longed to find her voice and more artistic opportunities elsewhere. Then, just after her 22nd birthday, she bravely left New York for Europe, settling in Paris and then London to soak up their unique inspiration, growth lessons and opportunities to perform. All these experiences have helped fuel the creation of her music since, including “A Momma To Cry To”.

“I moved to Paris to find my freedom and be inspired by my literary heroes such as Rimbaud and Baudelaire,” recalls Cotto. “Then, life took me to London where I played in blues clubs. A repeating lyric in the song is, ‘Where is my home?’ My home has been in many cities, but ultimately the greatest home I discovered was within myself.”

With “A Momma To Cry To” and her raucous and self-assured previous single “Cherry Red”, that hard-earned maturity and confidence in herself and her artistry shows up all over Caroline Cotto’s music. It’s clear that she’s an artist who’s arrived at the perfect place to give herself permission to launch.

“‘A Momma To Cry To’ is about the power of a woman aware of her circumstance but rising above it in all her glory. She enters the realm of her divine path full of happiness, peace and is free.”

“A Momma To Cry To” is available now.
We would like to thank Eric Alper for the press release and artist profile.