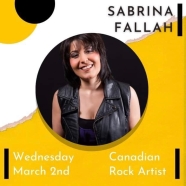 Sabrina Fallah is a rock singer, songwriter and guitarist from Ottawa, Ontario, Canada. She grew up listening to Michelle Branch, Avril Lavigne, Kelly Clarkson, Simple Plan, etc. Her influences are Green Day, Bon Jovi and Billy Idol. She has been told that when she sings with her raspy, edgy, and powerful voice, she sounds like Joan Jett, Pat Benatar, The Cranberries and Melissa Etheridge.

In January 2019, Sabrina got signed to Dance Plant Records with distribution for her music by The Orchard on iTunes. In November, Sabrina got her first mainstream interview and got her songs “The Frontline” and “Hurt” aired on WSBS Radio (860 AM and 94.1 FM) with Ron Carson, Massachusetts, United States. Thanks to Ron Carson for giving her that very first opportunity, her music has been picked up by many more mainstream stations.

In 2020, Sabrina had an interview with Brian Sullivan on WBLQ 1230 AM in Westerly, Rhode Island, United States. A friendship was established and in 2021, Brian asked Sabrina to join him as his co-host on his morning show “Brian Sullivan’s Early Show”, which is on Saturdays at 6am EST. Sabrina loves being on the radio and is thankful for the opportunity.

Sabrina’s music is getting airplay on Kent County Classic Rock I-105.5 FM AND AM 1450 in West Warwick, Rhode Island, United States. She is very grateful that Crazy Chris and DJ Gadget have given her music a chance to be played on a Classic Rock Station.

Her music has been played, featured and some are in rotation on mainstream stations internationally. Her music has also been featured on iHeartRadio stations.

Here are the 12 songs in the link https://www.dropbox.com/sh/jy5gchwh34phj0m/AADHiSn-l_fszd6z1r9-zCHEa?dl=0&m=

Kiss Is a Killer

Paradise Comes With a Price