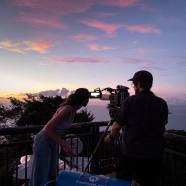 On the occasion of the commemoration of the bombings of Hiroshima (August 6) and Nagasaki (August 9), SPIRA and Metafilms announce that the documentary feature film Mama No Himitsu by Laurence Lévesque (Port d’attache) has started shooting. The first images were filmed in Japan in mid-July by cinematographer Sébastien Blais. The crew, which also includes sound recordist Camille Demers-Lambert and the film’s main protagonist, Noriko Oi, will stay on the Japanese archipelago until September 3.

Mama no himitsu follows Noriko, a 60-year-old Canadian woman of Japanese origin who returns to her native land in the hopes of reviving her mother’s memories, Mitsuko, a survivor of the Nagasaki atomic bomb, while preparing the sale of her childhood’s home.

The film is produced by Rosalie Chicoine Perreault and Catherine Boily for Metafilms, with the financial participation of Telefilm Canada, SODEC, the Conseil des arts et des lettres du Québec, the Crédit d’impôt cinéma et télévision (Gestion SODEC), and the Canadian Film or Video Production Tax Credit. Mama no himitsu will be distributed in Canada by SPIRA in 2024.

In 2017, Laurence directed a narrative short film, Drap contour, which won the Audience Award at the Moonrise Festival, and the Best Drama Award at Festival 6 on Nebraska. She then directed Port d’attache (2019), a documentary short film. It was selected at the prestigious Visions du Réel festival, won the Best National Short or Medium-Length Film award at the RIDM, as well as was nominated for the Best Short Film award at the Gala Québec Cinéma. In 2022, Laurence completed a master’s degree, which had her reflecting on documentary filmmaking. Mama no himitsu is her debut feature.

MAMA NO HIMITSU – with the participation of Noriko Oi

Founded in Montreal in 2003, Metafilms aimed to offer young, unusual creators the means to express their vision of cinema and life. Counting now more than fifty films to its credits, which have been shown internationally and have garnered numerous awards in Quebec and abroad. Building on its producers’ experience, Metafilms keeps seeking and supporting artists and singular films in fiction as in documentary.

SPIRA is a cooperative devoted to independent filmmaking, born in 2015 from the merger of Spirafilm and Vidéo Femmes, which had both been around for nearly 40 years. Spira’s core mission is to support the production and distribution of independent films, whether short or feature. Each year, about thirty works benefit from its various creation support programs. SPIRA also distributes documentary and fictional works in various markets in Canada and abroad: festivals, theatres, television, Web, etc.

We would like to thank Caroline Rompré | pixelleX communications for the press release.