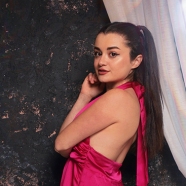 Spotify — “Where It All Began”

Canadian alt-electro-pop darling Mauve considers “Where It All Began” with the release of her electrifying new single and music video — available now!

A reflective think-piece that merges her experiences with her gratitude, all set to an electro-pop beat, the song serves as the lead single from her debut album, Dream State, on which she partnered with #1-charting industry powerhouses; production credits include Kyle Shearer (Carly Rae Jepsen, Melanie Martinez, Becky G), Jason Couse (JUNO & Polaris Prize-nominated musician from The Darcys), LYRE (top Billboard charting female duo), and more.

“I’m much more grateful now that I know,” she coos on the lyrics.

“This song is about those moments where you question yourself and ask if you have what it takes and if you can really change things around for the better,” Mauve reveals. “All of these initial ideas and dreams start somewhere small and then begin to expand out.

“I wanted this song to highlight the journey one takes of trying to accomplish something where it seems like they’re the only ones who believe in it at first. It all begins with one person.”

An artist who finds herself creating at all hours — even waking her during sleep — music is her refuge, she shares. “It’s helped me step out of my shell and see the wonder that life has to offer. And this song is like an origin story of where this love for music and drive to be a singer all began.

“I was just in a room in my basement, playing some notes on a piano and singing along to whatever lyrics popped into my head,” she continues of “Where It All Began.” “I was kind of looking for something to inspire me and take me out of the bleak situation I was feeling.”

“Where It All Began” is track one of six on Mauve’s debut album, Dream State; songs from her album have been added to official Apple Music and YouTube Music playlists, and add to her more than 1.4+ Million streams on Spotify and subsequent 2+ Million views on YouTube.

It’s without question that the young starlet has hit her stride in becoming the forefront pop songstress from Ontario, Canada; her songwriting prowess sees her dance between genres, lacing her electro-pop tracks with EDM and RnB elements, and the combination of these futuristic mashups have pushed Mauve into the front of the line of electronica songwriting without slowing as she continues to write from her soul.

Propelled by accolades and legions of fans, Mauve’s next stop is the “Love Local Music” program led by her hometown and alongside Canada’s Music Incubator. She’ll be included in the organizing of a series of concerts at Celebration Square Amphitheatre, including the Y2K Fest and its newly announced headliner, Suzie McNeil, on September 9th.

“Where It All Began” and Dream State are available now!