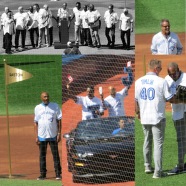 The Toronto Blue Jays hosted amazing weekend with two star attractions at the Rogers Centre. It started it off with the ceremony to honour the 30th anniversary of their ’92 World Series championship, and finally brought the sport’s trophy north of the border. The main act featured a pitchers’ duel between LA Angel’s two-way player Shohei Ohtani and Toronto’s own budding ace, Alex Manoah that ended in a 2-0 win for the Angels.

Back in ’92 , a generation of Canadians across the country was in love with baseball. For others of a younger generation, those ’90s teams remain teams they know through stories from older relatives or archival footage. For a brief time, Toronto was the centre of the baseball universe, and they were why. But three decades on, the club is still searching for its next title.

The team assembled this year came into the season with World Series aspirations. The Blue Jays were the preseason pick of many to win it all. With little more than a month to go, they have played a streakier season than was expected. They’re in the playoff mix, though they likely won’t reach the 96 wins the 1992 squad earned. But having that team in the building was a fresh reminder of what it means to learn from past team failures while taking advantage of when a competitive window is wide open.

The sellout crowd of 45,311 arrived early Saturday to be in their seats for the ceremony. After a video montage of the scenes of the ’92 playoff run played on the big screen, VIP guests — including Carter, Devon White, Mike Timlin, Duane Ward, Dave Stieb and Todd Stottlemyre — entered the stadium in twos while riding in Mustang convertibles, a nod to that team’s World Series parade. Pat Borders, the World Series MVP, rode in on his own, as did former manager Cito Gaston.

Dave Winfield, the veteran who joined the ’92 Jays before the season, got a solo ride as well, and as he entered, he held a microphone and told the crowd, “Dave Winfield wants noise,” a throwback to his plea in September of that year for the fans to get loud in the SkyDome.

In the centre-field WestJet Flight Deck, fans waved foam Js, held up “Winfield Wants Noise” signs and wore Coneheads, in honour of pitcher David Cone, as video montages played of player interviews and archival footage. The players and former executives, including former CEO and team president Paul Beeston, lined the infield and stood around the World Series trophy as they watched the screen. Following the American national anthem, attention again turned to the video board, which played Anne Murray’s rendition of “O Canada” before Game 3 in 1992.

Finally, rather than a ceremonial first pitch, Timlin and Carter re-enacted the final out of the Series, when the relief pitcher fielded a bunt from Atlanta Braves outfielder Otis Nixon and tossed it to Carter at first base. On Saturday, Carter even re-enacted his famous leap, though he didn’t get as much air 30 years later.