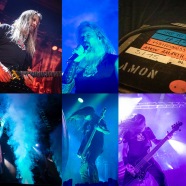 The Great Heathen Army Tour came, saw and conquered our fair city. Amon Amarth is a Swedish based melodic death metal act from the city Tumba and played their concert at HISTORY in Toronto. The band takes its name from the Sindarin name of Mount Doom, a volcano in J.R.R. Tolkien′s Middle-earth. Sweden’s Amon Amarth is the Valhalla of Viking metal.

The band is composed of lead guitarist Olavi Mikkonen, vocalist Johan Hegg, bassist Ted Lundström, rhythm guitarist Johan Söderberg, and drummer Jocke Wallgren. Ted Lundström, guitarist Olavi Mikkonen, and vocalist Johan Hegg have been with the band since the beginning. Amon Amarth has released ten studio albums, one compilation album, one EP, one video album, and ten music videos. A total of 12 albums, their tour featuring  The Great Heathen Army, and the sights and sounds of the concert was a real crowd pleaser.

As mentioned the sights and sounds drove the audience into a frenzy. Vocalist Johan Hegg had the crowd: singing, cheering screaming, moshing and slam dancing. A side note was the large contingency of ladies enjoying and singing throughout the concert. There were two huge statues standing on either side of the stage and an enormous horned crown at the center. Capable of erupting smoke and fire, the stage is visited by multiple Norse mythology characters during the show. In total, Amon Amarth played 15 songs to the capacity crowd.

One of the highlights was the audience rowing in 2 sequences during the concert. During the songs “The Great Heathen Army” for the first rowing participation, and then “Put Your Back Into the Oar” on the second rowing session. The band really encouraged fan participation. The set opened with “Guardians of Asgard.” A couple of songs from the newest album, included “The Great Heathen Army” and “Get in the Ring,” were part of the set with fans usually frowning on new material, but it appeared that the audience really enjoyed the new songs and the drinking anthem “Raise Your Horns.” The final song and ending the show for another fan favourite was “Twilight of the Thunder God.”

Overall this concert was very energetic and the atmosphere was intense @ HISTORY, unlike the show a couple of years ago @ REBEL. That show lacked the enthusiasm that was generated by the fans. If you can attend one of their concerts and experience the fantastic show during their North America tour, please do so as the tour continues through mid December.

We would like to acknowledge the Special Guest: Carcass, Obituary, Cattle Decapitation: