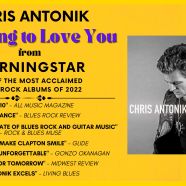 On his newest single, “Learning to Love You,” Canadian blues-rock guitarist, singer, songwriter, and 3x-Maple Blues Award-nominee Chris Antonik. Known as the Canadian Gary Clark Jr., Antonik wrote the song as a love letter to his partner, Juno award-nominated jazz musician Alison Young, with a nod to Derek and the Dominos’ classic album, Layla. “Learning to Love You” is a ballad about healing your heart and learning to accept love again after some challenging years rooted in the heartbreak of divorce. “Learning to Love You” fits well among the other songs of hope, rebuilding, community, and new beginnings on his fourth studio album.

Over this past Summer, Antonik released Morningstar, an expansive collection of musical experiences reminiscent of the legendary albums of the 1970s that feature guest appearances by award-winning guitarists Jarekus Singleton and Paul Deslauriers. His most personal album to date, Morning Star tells a cohesive story of his experiences as he enters mid-life. The last few years’ worth of life, love, loss, and growth are synthesized into an epic collection of songs about new beginnings, building community, mindfulness, self-compassion, and the power of home.

Co-produced by JUNO Award-winning producer Derek Downham, the album’s 14 songs take you on a sonic journey rooted in blues rock, soul, future-funk, and psychedelia and take experimental turns into modern rock and hip-hop territories. After the blistering lead single, “Waves of Stone,” Clapton influenced blues-rock of “Pilgrim,” and “Back to Good” featuring Tedeschi-Trucks Band vocalist Mike Mattison, “Learning to Love” is a worthy addition to the heavy hitting singles from the new album. Morning Star is an album built on nuanced songwriting, an amazing assemblage of guest musicians, and Chris’s mesmerizing guitar work complimented by stellar vocals.