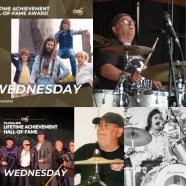 Randy Begg, a founding member, drummer, vocalist, and songwriter of the Canadian band Wednesday, died suddenly in Belleville on December 20 at 71.

Born in Oshawa, Ontario, Randy began his drumming career in the late 1960s. A chance meeting in Oshawa in July 1967 of Paul Andrew Smith and Randy Begg set the seed that became Wednesday. Randy and Paul spent the summer hanging out, playing impromptu concerts at local Oshawa parks and drop-in centres until meeting up with Mike O’Neil and John Dufek. John Hall formed and managed the Cellophane Spoon until 1971, when Bill Diel, a former keyboardist with Ronnie Hawkins and Fats Domino, took over the task. In 1970 the name was changed to Wednesday with the release of their first single, “Hang On Girl.”

They scored a hit single on the U.S. Billboard Hot 100 in 1974 with their cover of the song “Last Kiss”, which peaked at #34. That same year, they were nominated for the JUNO Award for Most Promising Group and the following year for Best-Selling Single of the Year. The single reached #2 in Canada and #1 on the Canadian Billboard 100. A follow-up single, a remake of “Teen Angel”, was their final chart single in America. The parent album, entitled Last Kiss, was released on Ampex Records in Canada, Sussex Records in the U.S., and A&M Records throughout the rest of the world.

The group continued with success in Canada, before and after changing their name to Wenzday in 1976. They scored their second biggest hit with an Elton John cover, “Loving You Baby”. It reached #6 in Canada.

Randy’s career saw him in many bands in later years – Lockerbie, The Scott Street Band and releasing album material with The Edge and The September Skye Band. Randy’s passion for the drums kept him actively engaged as a performer for over 55 years, most recently working in a band for a Christmas stage show for the Stirling Theatre in Ontario. The band Wednesday was inducted into the Oshawa Music Hall of Fame in 2022.

Paul Andrew Smith says, “Randy’s insatiable love for music and performing was only surpassed by his infectious friendship, which touched everyone he met. He was always giving, always there when needed. He loved people, and I will miss him greatly.”