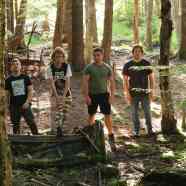 From the ashes of a band called Glass Atlas would rise the jet-fueled sound of The Flakes; founded in 2017 by guitarist Adam Sweeney and drummer Kyle Merson, they’ve been on a rampage since they hit the scene. In 2018, the band would be accompanied by the electrifying vocals of Tynan Moors, prompting several blazing singles that summer. Bigger shows like the Mount Funky music festival raised their notoriety and culminated in an appearance by The Flakes at Toronto’s legendary Horseshoe Tavern.

Halifax, Nova Scotia-based The Flakes released their nine-track LP Elephant in the Room in November 2021 and work on Pink Jetstreamstarted in April 2022—but not everyone in the band was ready to work on new music. The EP was intended to have a new song “Pink Jetstream” coupled with leftover songs from another recording session (album two sessions). In May 2022, the band parted ways with lead singer Tynan Moors. Within the freedom of a new lineup, Adam and Kyle shifted the direction of the EP, writing and recording new songs which would make up the Pink Jetstream EP.

“We wanted to make an EP to bridge the gap between the sound of Elephant In The Roomtowards the darker style we intend to explore with our second album,” says Adam. “Pink Jetstream is the step between. When Chase joined the band in June 2022, he wrote lyrics based on the working titles of each song, giving each song its own thematic value. With these lyrical elements, somehow Pink Jetstream became a kind-of concept album about space.

“Kyle and I always spend a lot of time going for walks, having smokes, and looking up to the sky,” Adam adds. “After watching jets and chem-trails on a pink sunset, Kyle came up with the idea of naming an EP Pink Jetstream and that thought never left my mind, serving as a huge inspiration for the song and EP. Funny enough, my musical goal for the song Pink Jetstream was to have a tune with a catchy guitar line, that could also change face and be super huge and energetic out of nowhere… In hindsight, I was inspired by the energy and catchiness of early 5SOS that I was (shamelessly) binging at the time.”